“I think I’ll be getting absolutely bang right on it.”

Alex Lynskey has just given reporters the best quote of the night at the World Series of Poker (WSOP) Main Event, even if he did so with a crestfallen expression, a frustrated shake of the head and the knowledge that his hopes for an $8.8 million payday are over.

Lynskey was dealt 47 hands of poker today and did not win a single pot. Despite the loudest and most lubricated crowd of the day, and perhaps of WSOP Main Event history, there’s nothing anybody can do in those circumstances. 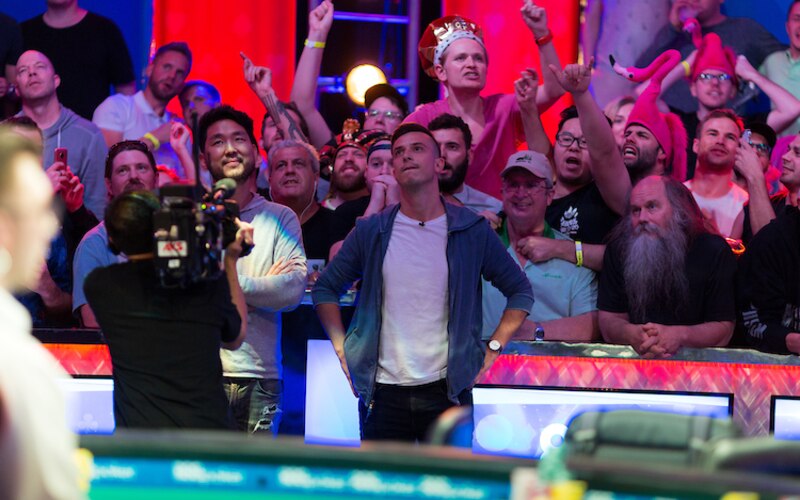 Alex Lyskey and rail: Plans to get ‘absolutely right on it’

The Anglo/Australian, carrying the hopes of both northern and southern hemispheres, is our seventh-placed finisher. He gets $1.5 million.

“I came in middle of the pack, laddered a couple of spots and got seventh,” Lynskey said, remaining pragmatic in the immediate aftermath of his elimination. “I was pretty card dead at the final table. There’s not much I could have done.”

Lynskey’s bust-out represents the end of the night for the army of security guards and emergency bartenders, who had been drafted in to handle the rowdy rail from both the UK and Australia. Lynskey was born in Yorkshire and lived in the north of England for 10 years before moving Down Under with his parents.

“It’s just great to have the support,” Lynskey said. “It’s always a good thing. It’s good TV, it brings people into poker…It feels really good, obviously, to be the first one since Hachem, and hopefully there’s a bit of a poker boom in Australia.”

Lynskey said he only saw two playable hands: raise-folding ace-queen and being told he was up against ace-king, and then finding 6♦6♣ and getting his dwindling stack in against John Cynn’s K♠Q♠. Once again the dealer waited all the way until the river to seal Lynskey’s fate, but eh 10♣9♣3♠10♦J♣ runout was terminal. 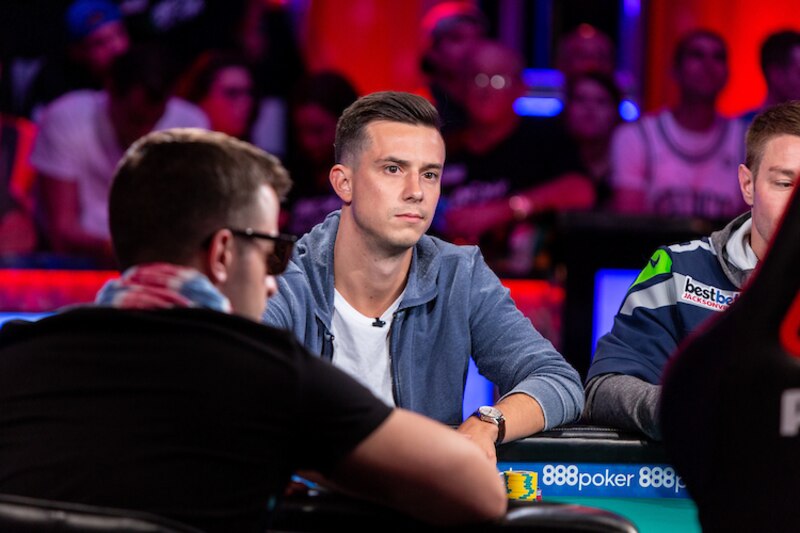 Though he admitted the reality of the situation will take a couple of days to sink in, Lynskey knew his supporters will have plans to celebrate this evening and haul him through the post elimination blues.

As he heads away, tournament officials said they will play until the end of the current level or until the next elimination, whatever comes soonest. We will then pause for the night.

Metalidi takes the fall as Zobian hits twice
Antoine Labat killed by the kings that once saved him
Final table player profiles
Two Miles: Jim and Tony
Is Hellmuth closing in on bracelet #15
As England departs World Cup, a new hero emerges
From the archive: Kassouf is finally silenced
Short stories of long nights at the poker table
The payout process
Then and now: Jake Cody
From the archive: K.L. Cleeton’s inspiring run
Inside the ideas factory: Jason Somerville’s Run It Up Studios
Stop, start, break, start, bubble for Matt Hopkins
Then and now: Barry Greenstein
A comprehensive guide to the WSOP bubble
Untangling the cake riddle to discover the key to Liv Boeree’s heart
Meet Muskan Sethi: India’s presidential poker ambassador
Then and Now: Daniel Negreanu
A flippin’ fantastic way to enter a poker tournament
Jeff Gross: A momentary pause in the perpetual motion
From the archive: Stages
Moneymaker surveys the world he created
Negreanu continues preparations for PokerStars Players Championship
Then and Now: Andre Akkari
Then and Now: Maria Konnikova