From doggie dads to cereal eaters, via exiled Yorkshiremen and former champions. Here are the final nine players involved in the 2018 World Series of Poker (WSOP) Main Event — and here’s a reminder of how we got here. (With thanks to Seth Palansky and the WSOP media team.)

Artem Metalidi has been playing in the annual World Series of Poker since he was 21, and made a huge statement early on in his career as a professional poker player when he finished second in the $3,000 6-Handed No-Limit Hold’em event in 2012. The score of $350,806 is still his largest live tournament cash to date, though he is a regular on the European circuit with a string of cashes on the EPT. Metalidi has won a total $728,254 at the WSOP from 25 separate cashes, but has never previously been beyond Day 2 in the Main Event. Eliminated in eighth: $1.25 million 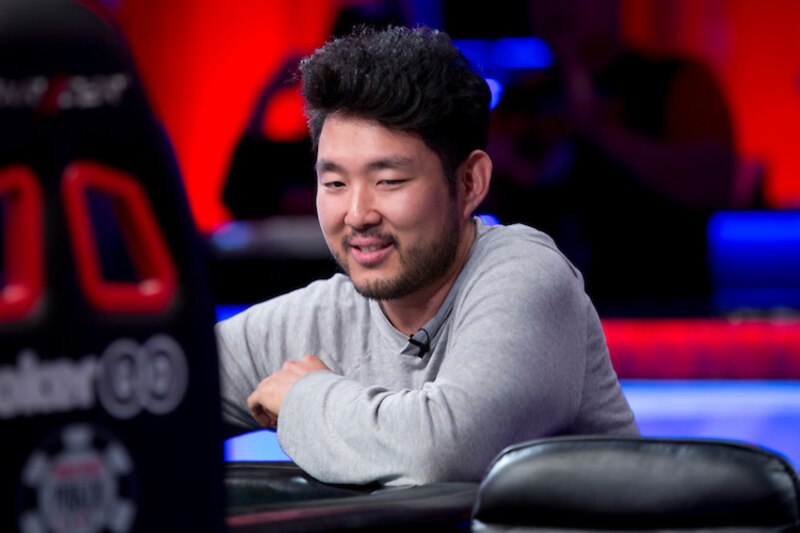 Two years ago, John Cynn came within a breath of the Main Event final table, but fell agonisingly short when he was knocked out in 11th for $650,000. It was the best live tournament performance of his career – until now. The 33-year old from Evanston, Illinois, now residing in Indiana, bested his own performance from 2016, and now finds himself at the final table where he is guaranteed at least $1 million. Eventual champion: $8.8 million There hasn’t been an Australian at the Main Event final table since Joe Hachem’s victory it in 2005. That changes this year, as 28-year old Alex Lynskey of Brisbane attempts to recreate Hachem’s success. Lynskey was born in Yorkshire, in the north of England, but moved Down Under with his parents when he was 10. He has by far the loudest rail at the final table, predominantly comprising other British players. Lynskey’s biggest WSOP cash to date came last year in the Marathon event, when he finished runner up for $426,663. In total, he has 13 previous WSOP cashes for $556,389. He is also very well known on the online tables where, as lynsky99, he has numerous major MTT results. Eliminated in seventh: $1.5 million Tony Miles is a professional poker player and self-confessed adrenaline junkie. His final-table run in the Main Event hits big for both vocations. The 32-year-old attended the University of North Florida in Jacksonville. He was born in Ogden, Utah and now resides in Lake Mary, Florida. Miles had not cashed at the annual World Series of Poker until this summer where he has cashed in the Colossus (438th), Millionaire Maker (442nd), and of course the Main Event. The momentous payout coming his way will greatly surpass his best live cash of $18,000 from a third place finish at a WPT Jacksonville Summer Series. When Miles is not on the felt he enjoys wakeboarding, snowboarding, rock climbing, among other activities. He has a massive supporting section at the final table including his brother, mother Debbie and step-father, and his father Jim, an Air Force veteran. Eliminated second: $5 million To say that 35-year old Nic Manion is having the best tournament of his life would be an understatement. Manion, from Muskegon, Michigan, has only one previous WSOP cash, for $5,769, and $16,739 in total recorded earnings. However he won two live satellites to the Main Event and is now playing the rush. He became overall chip leader in the sensational final hand of Day 7, when his pocket aces beat two pairs of pocket kings, with Antoine Labat and Yueqi Zhu, who was eliminated. Now Manion, who is a proud dog-dad (he has an English bulldog, a French bulldog, and a Boston terrier), is guaranteed to increase his total live earning nearly 60-fold, and potentially much more than that. Eliminated in fourth: $2.825 million 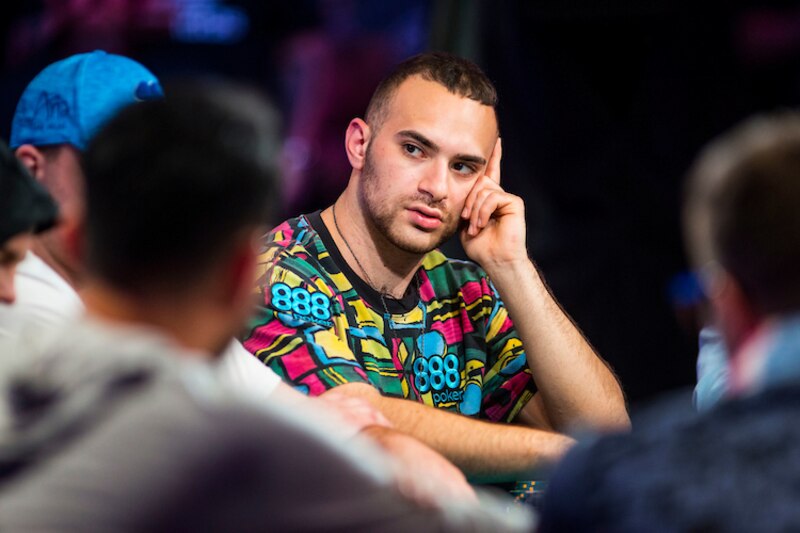 The youngest player remaining at this table is 23-year-old Aram Zobian, originally from Cranston, Rhode Island, now living in North Providence. Zobian plays poker for a living and has just over $100,000 in tournament earnings. His largest live tournament cash came from a second place finish in the No-Limit Hold’em Championship at the MegaStack Challenge, Mashantucket, good for $47,000. This will be Zobian’s fourth cash at the annual World Series of Poker and he has guaranteed himself a monster payday. He has had a big stack for all of the tournament so far, finishing in the top 100 of all survivors even during the massive Days 1, 2 and 3. He was chip leader at the end of Day 6. Eliminated in sixth: $1.8 million Michael Dyer, a 32-year old from Houston, Texas was the tournament chip leader at the end of Day 5 and held the lead most of Day 7 too until a major skirmish vaulted Manion to the top. Dyer enters the final table a close second in chips. Dyer has only three previous WSOP cashes, the biggest of which came in 2009 – he finished eighth in a $2,000 No-Limit Hold’em event for $65,905. That score accounts for more than two thirds of his total recorded career live tournament earnings ($95,020). But with his final-table performance in this event, he will add at least $1 million to that total. Is almost certain to be the only poker player ever to be seen eating dry breakfast cereal direct from a box on the ESPN feature table set. Eliminated third: $3.75 million 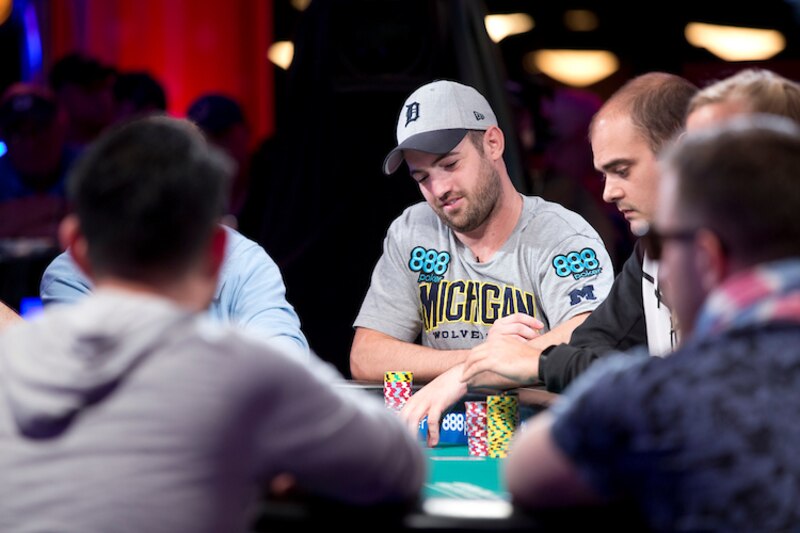 Joe Cada has done something no one else at this final table can claim: he’s been here before. Not only did Cada make the Main Event final table in 2009, he won the bracelet, the most prestigious prize in poker. He’s now the first previous Main Event champion to return to the final table since Dan Harrington. (Harrington, the 1995 champion, made the final table again in 2003 and 2004.) Cada is the most accomplished player at the 2018 final table and won his third career bracelet this summer. He has $10,779,041 in total tournament earnings, most of which ($8,546,435) came from his 2009 victory. Winning the $8.8 million first prize this time would make him the first player to repeat as Main Event champion since Stu Ungar won his third title in 1997. Eliminated in fifth: $2.15 million The 29-year old Antoine Labat from Paris continues a recent tradition of French success at the WSOP. Last year, Antoine Saout and Benjamin Pollak were at the final, the former for the second time in the past decade. Sylvain Loosli also finished fourth in 2013. Labat has two prior WSOP cashes, totalling less than $7,000. He has $194,789 in recorded tournament earnings. Labat would have been in much better shape going into the final had he not lost more than 70 percent of his stack in the hand that gave Manion the chip lead and ended Day 7. Labat is an experienced games player, listing board games and chess among his hobbies. Eliminated in ninth: $1 million Two Miles: Jim and Tony
Is Hellmuth closing in on bracelet #15
As England departs World Cup, a new hero emerges
From the archive: Kassouf is finally silenced
Short stories of long nights at the poker table
The payout process
Then and now: Jake Cody
From the archive: K.L. Cleeton’s inspiring run
Inside the ideas factory: Jason Somerville’s Run It Up Studios
Stop, start, break, start, bubble for Matt Hopkins
Then and now: Barry Greenstein
A comprehensive guide to the WSOP bubble
Untangling the cake riddle to discover the key to Liv Boeree’s heart
Meet Muskan Sethi: India’s presidential poker ambassador
Then and Now: Daniel Negreanu
A flippin’ fantastic way to enter a poker tournament
Jeff Gross: A momentary pause in the perpetual motion
From the archive: Stages
Moneymaker surveys the world he created
Negreanu continues preparations for PokerStars Players Championship
Then and Now: Andre Akkari
Then and Now: Maria Konnikova