It is early July, it is the Rio All Suites Hotel & Casino, Las Vegas. This is what it is: It is the World Series of Poker (WSOP) Main Event.

Every year since the early 1970s, poker’s finest have found their way to the middle of the Nevada desert to put down $10,000 apiece and hunt what remains the most prestigious title in the game. And here we are again to cover poker’s undisputed centrepiece. Here we are again to see a World Champion crowned.

Moments ago in the Amazon Room at the Rio, WSOP Tournament Director Jack Effel, alongside reigning champion Scott Blumstein, got 2018 Main Event under way. “Every single summer, there’s no place I’d rather be,” Effel said. “It will be a great experience for you.” Blumstein agreed, like a man would who won more than $8 million here last year. “You gotta believe in yourself and get lucky,” Blumstein said. “That’s the combo for poker…It’s what I did and it worked out.”

Arguably the most significant point Effel raised in his opening speech referred to the tournament structure. “Please make sure you study the structure sheet because the break schedule is a little cattywampus,” Effel said, effortlessly dropping in some deep south slang.

“Cattywampus” is a good word, and it’s good advice from Effel. A few things have changed this time. For the first time since 2007, the Main Event is going to play from start to finish without a single day off. We’re going all the way, non-stop, for this 38th renewal: 13 days straight until there’s a gold bracelet around somebody’s wrist.

Even last year, the first for nine years without a November Nine, there were a couple of days off worked into the schedule to allow players, dealers and staff to regroup. But not this time. There is no let up between today’s Day 1A and Saturday, July 14, when the last three players will return and decide the winner.

Most days begin at 11am and feature five two-hour levels of play, with more than two hours of breaks scheduled as well. It means days edging towards 12 hours in duration, and exhaustion certain to play a part. 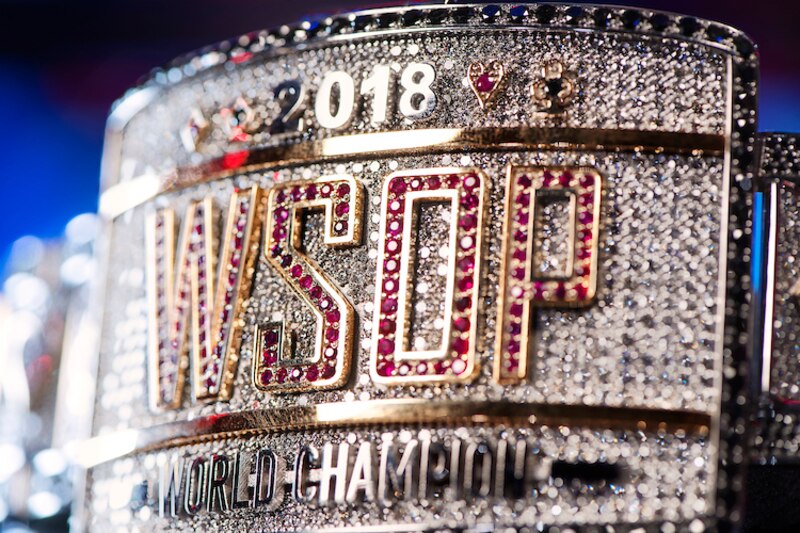 We won’t know the size of the event until the last player is registered (late entry is open until the end of Level 3) but we can at least begin planning the structure of the days. This year, there will be three starting flights–Days 1A, 1B and 1C, on Monday, Tuesday and Wednesday–and two Day 2s. Survivors from Days 1A and 1B play day 2AB on Thursday and those left from Day 1C play on Friday.

After that, Days 3 through 7 play out like a normal tournament, with only nine players making it through to Day 8. That then begins three days of final-table play: we go from nine to six on Day 8; from six to three on Day 9; and from three to a winner on Day 10.

Over the past 10 years, the tournament has concluded at around Level 41, and there’s no reason to think this year will be any different. The “shortest” WSOP Main Event over the past decade came in 2008, 2009 and 2015, when the tournament finished in Level 39. But both Scott Blumstein and Qui Nguyen had to wait until Level 43 before picking up their bracelets in 2017 and 2016, respectively.

But don’t weep for them. Despite earning the second-lowest hourly rate among World Champions from the past decade, Nguyen was still picked up a paycheck of $93,085 per hour. It’s only when looking at Martin Jacobson’s $121,951 per hour that Nguyen might feel put out. Jacobson finished the job on his $10 million victory in 2014 before the end of Level 41.

It can actually be pretty interesting to examine the hourly rate of players in this event. Champions have earned an average of $105,174 per hour over the past decade, and nobody in the world is going to sniff at that. But a min-cash, which is for many the principal goal of this event, will likely earn you about $600 per hour. In 2008, when a min-cash was $21,230, you’d have got $758. But more recently a min-cash is $15,000 and you’ll need to last 16 levels to get it.

All of this is worth more than bubbling, of course. That remains the single least sought after spot in any poker tournament. But while those min-cashers might get a life-changing experience from this event, it will be far from a life-changing sum.

It’s lucky nobody does this purely for profit. It’s all about the love of the game, right?

The full schedule for the coming days is as follows: