Aditya Agarwal is comfortable at any poker table, but there are two arenas in particular in which he thrives. One is the online tournament tables of PokerStars, where his online moniker “intervention” has long been feared. The other is the World Series of Poker (WSOP) in Las Vegas.

Agarwal is playing his 13th WSOP Main Event this year and has cashed in six previous outings. (We followed him level-by-level as he locked up the sixth of those in 2016.) He is entering Day 3 yet again this time around hunting a seventh Main Event in-the-money finish, and what would be a seventh World Series cash this summer. Those results this time have pushed career live earnings past the $1 million mark.

This year, however, Agarwal came to Vegas with one slight amendment to the familiar story. Since 2015, the 33-year-old Team PokerStars Pro has been telling people that his largest single live score was the $96,445 he won for finishing 71st in the Main Event three years ago. But that all changed in March this year, when he progressed all the way to the final table of the APPT Macau Main Event, outlasting 354 other players to face off heads-up against an unknown Chinese player named Lin Wu. 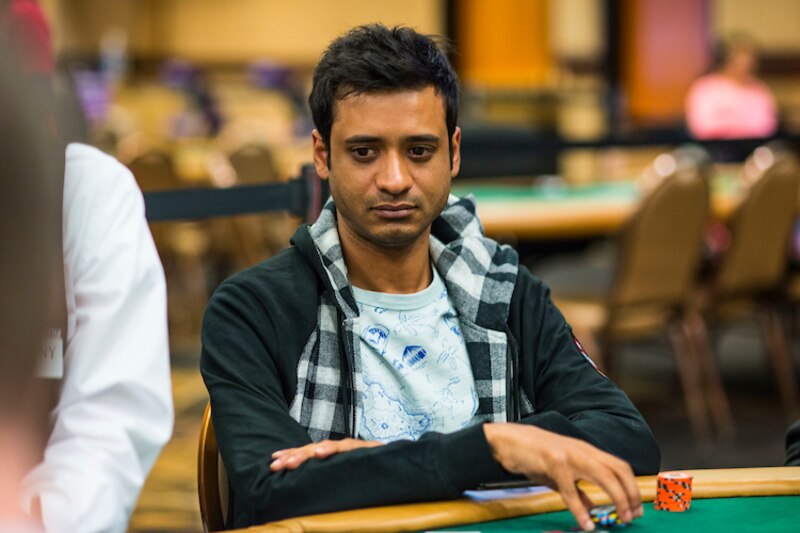 Aditya Agarwal: Back on familiar turf at WSOP

Agarwal was by far the most experienced player in the last five. He also had the chip lead for long periods. The man from India seemed a lock for the first major live title of his career and a payout of close to $400,0000, as well as a Platinum Pass to the PokerStars Players Championship (PSPC) in the Bahamas in January.

And then variance happened. Agarwal was beaten into second place.

“It definitely did hurt,” Agarwal admitted. “At that moment, I was really disappointed. It didn’t really feel like I’d won anything, coming so close and getting second.”

The payout was still a handsome HK$1.9 million, which is close to US $250,000, and more than two-and-a-half times he biggest previous result. But the nature of the defeat was also particularly cruel: at one point, Agarwal had a straight on the turn and had his opponent all-in. It was seemingly a tournament-winning hand. But a king on the river also hit Wu’s hand, making it a chop.

Agarwal was actually the first to spot it. As the tournament supervisor awarded the title to Agarwal over the microphone, the player himself knew it wasn’t done. “They announced it,” Agarwal said. “I had a straight on the turn and the guy had chop outs. It seemed like it was over, but it wasn’t.” 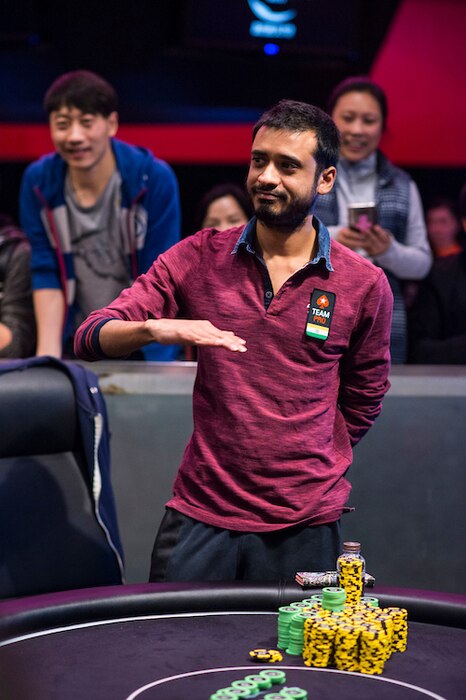 “Hold on one sec… it’s not over,” gestures Argawal at APPT Macau

Though his rail began celebrating, Agarwal himself was the first to indicate to the dealer that it was a split. “I was like, let’s just wait for the river. You go through so much in the tournament, you just want to wait for the last card before you’re sure.”

Agarwal’s wife was among those watching, crestfallen, from the sidelines. But the seasoned pro was quickly able to pick himself up.

“She was very disappointed too, but you get on with your life,” Agarwal said. “It was a good score, you know you played well, and there will be plenty more opportunities, so you shouldn’t be that disappointed. You look for the bigger story.”

Agarwal also said that some of his friends reminded him that he had got lucky against Wu earlier in the tournament, and that his APPT run may have ended even before the final. “It puts things into perspective. It’s not that bad getting second,” Agarwal said.

It’s this peace of mind that Agarwal also fostered at the online tables, in addition to his actual playing skills. The more tournament experience you can gain from playing any kind of poker, the more you learn to roll with the punches, even with the stakes so high.

“I have been playing tournaments for a long time, so I’ve seen a lot of variance,” Agarwal said. “It’s tough at the moment that it happens, and it’s always disappointing when you don’t win if you go deep. But I have played enough poker to not let it bother me that much. I felt really good after a few days.”

Again, much like the online game, there’s always another tournament around the corner to put things right. Even missing out on the Platinum Pass can be taken in his stride. He said: “Luckily there are a lot of chances for Platinum Passes, so I wasn’t that disappointed.”

For the time being, the hunt goes on for a major title, but there’s no let-up in Agarwal’s passion for the game.

“I’m still waiting for it,” he says. “I’ve been trying for a long time. It would be nice to be a champion, or something. But I’ll keep playing.”

The field converges for bubble day…perhaps
The rough and tumble of Day 2
From the archive: Blood, sweat and other bodily fluids
Untangling the cake riddle to discover the key to Liv Boeree’s heart
Meet Muskan Sethi: India’s presidential poker ambassador
A return of the masses for the long, slow dance
Then and Now: Daniel Negreanu
Records broken and Red Spades flying
“Thanks Daniel” — A letter to Negreanu from Phil Galfond
A flippin’ fantastic way to enter a poker tournament
Jeff Gross: A momentary pause in the perpetual motion
From the archive: Stages
Moneymaker surveys the world he created
Negreanu continues preparations for PokerStars Players Championship
Then and Now: Andre Akkari
An exceptional Day 1A
From the archive: Rio here, Rio there
Then and Now: Maria Konnikova
All systems go on ‘cattywumpus’ World Series