WSOP 2018: A return of the masses for the long slow dance

A brief conversation late yesterday with Maria Konnikova focused on the structure of the World Series of Poker (WSOP) Main Event. Though she is only playing this tournament for the second time, Konnikova has spotted something that weirdly escapes many of her opponents: there are a lot of chips in play.

At the end of the night, Konnikova sat in 513th place from the Day 2AB field with a stack of 139,000. But when players return for Day 3 tomorrow, the big blind is going to be only 2,000 still. With reference to table-mates fretting about what appears to be a short stack, Konnikova said: “I say to people, ‘Just think about how many big blinds you have.'”

Konnikova has 70 of them, which is perfectly healthy. She is also almost precisely in the middle of the pack, having watched approximately 1,135 players survive the full five levels (precise numbers tbc).

As expected, around 46 percent of yesterday’s starting field progressed yesterday, though Shawn Daniels’s 532,500 is a comparatively small stack for a chip leader.

Yes, it’s 216 big blinds, but it’s the smallest stack in comparison with starting stack for a Day 2AB chip leader since 2010. Daniels has amassed 11 times his starting stack of 50,000 but a leader at this stage usually has more than 15 times starting. (These are, obviously, very minor quibbles.) 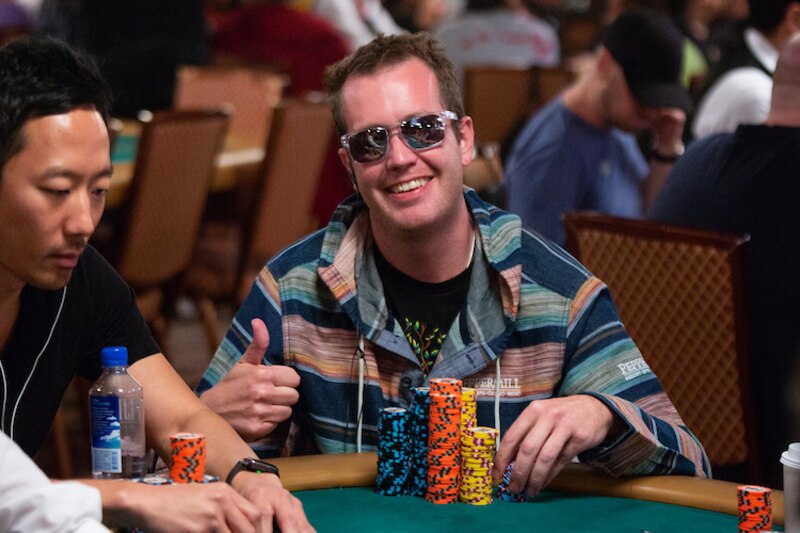 Shawn Daniels: Chip leader at end of Day 2A

And if any of them look at their stack and think it’s too small, remember that Konnikova bagged “only” 33,500 at the end of Day 1A and now she’s the first of the Red Spades through to Day 3. The Main Event may be the Big Dance, but it’s a sloooow dance too. The blinds restart at 300/600!

Then and Now: Daniel Negreanu
Records broken and Red Spades flying
“Thanks Daniel” — A letter to Negreanu from Phil Galfond
A flippin’ fantastic way to enter a poker tournament
Jeff Gross: A momentary pause in the perpetual motion
From the archive: Stages
Moneymaker surveys the world he created
Negreanu continues preparations for PokerStars Players Championship
Then and Now: Andre Akkari
An exceptional Day 1A
From the archive: Rio here, Rio there
Then and Now: Maria Konnikova
All systems go on ‘cattywumpus’ World Series