Attention “Penguins”, “Headset Warriors”, “mousers”, and those who may be “Ehh… multi-tasking” right now. This is the “Old World Calling.”

In case you were wondering what all that gibberish was about, they were just some of the (glorious) entries we had for our VR Poker contest.

You might need a recap of what was involved.

In the spirit of pioneers venturing into new territory, a new game like VR Poker needed new language. So, we asked you to provide it.

The response was as creative and irreverent as we’d expected from our readers. But unfortunately, there could only be one winner.

So, after deliberation, and lengthy phone calls with the people here who check things for obscenity, we settled on term that sums up a problem soon to be familiar to any VR poker player. It makes @TheWorstWinner the recipient of a brand-new Oculus Rift headset complete with controller things.

His mark will be all over this first edition lexicon, having also provided such gems as “mouser”, “virtual insanity”, “cybernate”, “mime crimes”, “avatarts”, and the concept of “The vrapture” – a bold first step towards turning VR Poker into a religion.

You can find definitions of all those words below.

We send him – our test keyboard cat – into this new virtual world in the spirit of exploration (he should provide his own jump suit and oxygen tank). We encourage him to report back on what he finds. If he remembers to switch off occasionally that is, or indeed is “momplugged”.

Actually, that word reminds us of something.

While we could only give away one VR headset, we will be sending some modest runners-up prizes for some of the other entries.

“Momplugged” (the act of being unplugged from the VR game by a spouse of mother) was the creation of @MrTazzzz. We’ll be sending you a small something.

Then there was “Avatell“, the creation of @wewillseewontwe, used to describe your avatar’s tell. You might think such a thing was impossible, but that won’t stop you looking.

Finally there was “Reality Hole“, the idea of @DrBambinni, who sailed very close to the truth. Maybe too close. You’d best look that one up yourselves.

That leaves a long list of honourable mentions of those whose names will be forever associated with the original founders of the PokerStars VR Poker Lexicon.

And if inspiration continues to strike, keep sending your ideas.

Avatarts = Over the top avatars designed to gain attention and impress other players.

Cybernate = When a player falls asleep at the virtual table.

Ehh… multitasking = Using the restroom without removing your VR gear.

Headset hero = The modern equivalent of the keyboard warrior.

iBalling = Giving your opponent the virtual stare down.

Reality Hole = that feeling when you’ve won loads in VR Poker but you suddenly realise that it’s only play money and you’re really sitting in a gloomy room in Kettering in your underpants and what are you doing with your life and anyway what is reality?

RC-Reality Check = means you have to take the glasses off for a moment.

Virtual Insanity = When a player is clearly on tilt.

Virtually Nsync = A synchronised dance celebration between a number of players.

The “Vrapture” = The glorious moment when we all ascend to a higher level of VR poker.

VRingles = Not to be confused with shingles. It’s an imagined state of sickness one has after have played 24 hours or more of VR Poker. Sometimes it might actually be real.

VRinkles = small lines in the skin someone gets after wearing the VR Headset for more than 70 hours.

VRoomies = the people with whom you share the same virtual room while playing poker on Pokerstars VR.

Vurt = When you get rivered so bad you can feel it in real-life.

Yanking your chain = when people in the real-world design to mess with your headset while you’re wearing it.

2D-or-not-2day = Every day during the period waiting for a VR headset. 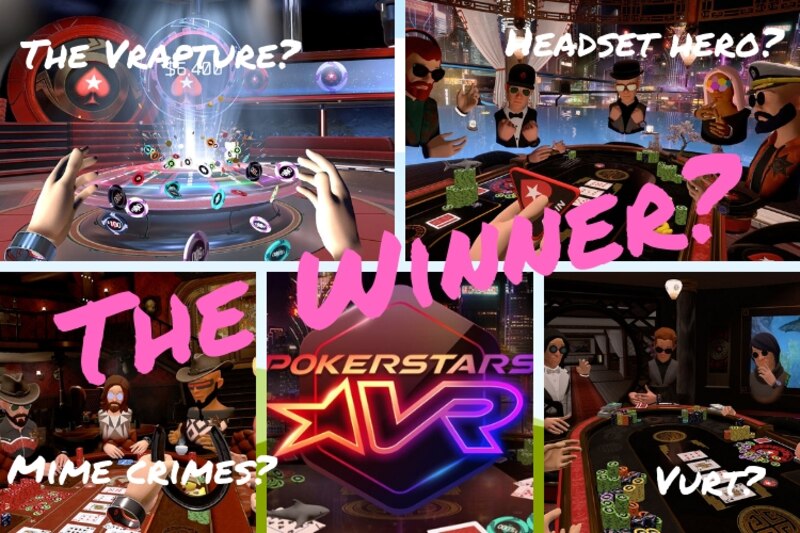