We are still not at the end of the first week of the 2018 World Championship of Online Poker (WCOOP) and yet “aDrENalin710” last night won an unprecedented third title. Are we seeing the best WCOOP performance of all time? The Russian player again headlines our round-up from the WCOOP tables on Day 6. 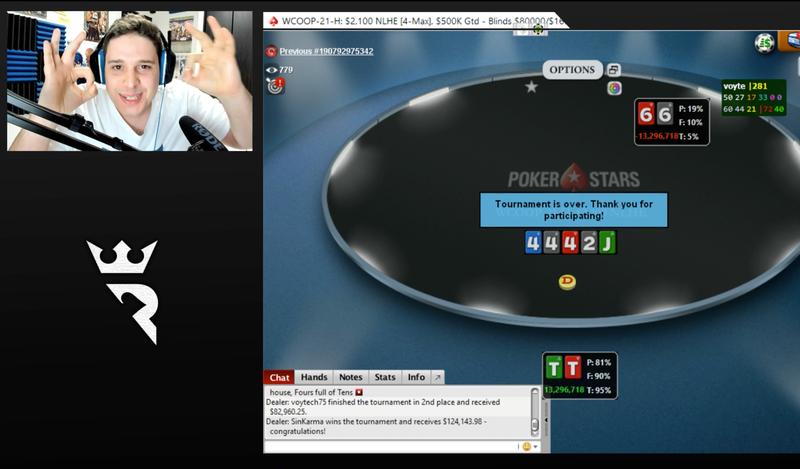 Denis “aDrENalin710” Strebkov is a beast. Even before this tournament series began, he was tied second for all-time WCOOP titles, with four. And now WCOOP 2018 is rapidly becoming the “aDrENalin710” show after the Russian player won WCOOP-20-L $11 5-Card Draw title overnight for $3,233.76. He now has seven WCOOP titles total, and three this year. That’s the most of anyone.

Not only that, having already won the $2,100 Razz and the $109 PLO, this year’s victories have come in three different buy-in levels, and in three different poker disciplines. This is worth noting too: we are barely one third of the way through this series. The race is on for nine…

Drinan the bounty hunter: PokerStars tournament boss Connor “blanconegro” Drinan added another WCOOP title to his collection, and further boosted his $5.6 million online winnings. Having previously won a PLO8 WCOOP title last year, and a No Limit Omaha hi/lo title in 2016, Drinan completed the hat-trick in the $10,300 NLHE PKO, for which he won more than $385,000. He beat fellow Super High Roller Rui “RuiNF” Ferreira into second. This victory was especially remarkable as $222,460 of Drinan’s win came from bounties, with his “regular” prize $163,301. Thoroughbreds only in the HORSE: The toughest final table of the series so far assembled in the high buy-in HORSE tournament, where mixed games superstar Carlo “Ravenswood13” van Ravenswoud, prevailed. The Dutchman living in Malta topped the following last six:

COUNTRIES OF THE DAY

Welcome to the WCOOP winners’ board China, Thailand, Poland, Malta and Latvia. “lovexiup” became the first WCOOP champion from the world’s most populous country, while both Poland and Malta can thank ex-pats for their titles.

Diogo “phounderAA” Viega is originally from Portugal, but was representing Poland as he won WCOOP-21-M 4-Max. Similarly The Netherlands’ loss is Malta’s gain in the case of Carlo “Ravenswood13” van Ravenswoud.

PLAYER OF THE DAY – TWITCH SPECIAL

Here’s how it went down for Gutierrez:

The dream is still alive as @willy_bolda has a chip and a chair:

Stoked to make day 2 of #WCOOP-22-L not highly chipped but a chip and a chair so still a chance pic.twitter.com/K4cljFKOse

There are just too many good poker streams during the #WCOOP. pic.twitter.com/sSO4Lqhsc5

After knocking out Jason “jcarver” Somerville in 11th place, Elias “SinKarma” Gutierrez went on to win the 4-Max high buy-in while streaming on Twitch. His viewers saw that winning moment live:

There’s heaps going on across the whole PokerStars world during WCOOP, and PokerStars Blog is just about on top of it all.

Enjoy your Saturday with a few more treats:

For full leader board information, check out the official WCOOP Player of the Series page.

You didn’t have any plans, did you, this weekend? Good. Because you’ll be playing poker, specifically this little lot:

With 8-Game, you’ll be expected to ante up in all of the following:

And we strongly suggest a quick recap in our 8-Game tutorial.