There’s only one day left at the 2018 World Championship of Online Poker (WCOOP) and we’re building and building to a huge crescendo. There was a frenzy of interest yesterday as poker’s top streamer hit a new high, while huge names won titles and another moved into pole position in the big one. All in today’s latest WCOOP round-up.

The $5,200 WCOOP Main Event is moving towards what could be a tremendous final table, with some of the contemporary online game’s undisputed monsters leading the charge. There are 17 players left and it’s Linus “LLinusLLove” Loeliger in front, with a massive chip lead. Loeliger has 98 million chips, which is 140 blinds when they return to a 700,000 big blind. For all that, the headline news from the WCOOP tables yesterday was the poker frenzy that took over on Twitch, particularly the table featuring Lex “L.Veldhuis” Veldhuis. Team Pro’s favourite Dutchman ran very deep in the Main Event and at one point had 32,839 concurrent viewers. That was the second most viewed channel across the whole of the streaming platform and left some of the world’s best known video game streamers in the shade. Veldhuis’s run included plenty of highs and lows (see Twitch section below) and came to a crushing conclusion with a gruesome blind vs. blind runner-runner flush knockout.

Among those still involved, Loeliger leads Russia’s “wann2play”, who is second, with 59.6 million. Simon “C.Darwin2” Mattsson is in fourth place, with the UK’s “0409479” in eighth and Noah “Exclusive” Boeken in ninth. Behind them, both “CrazyLissy” and Michael “mczhang” Zhang, have won tournaments during this series already.

Red Spade involvement ended in the tournament when Liv Boeree and Veldhuis both went out within a few spots of one another. They both won $28,632.35 for their 62nd (Boeree) and 58th (Veldhuis) finishes.

Seventeen players now remain after two days of the $55 “low” Main Event, with “AlexKhandaur” of Russia holding a narrow chip advantage over the UK’s “equinespy”. Both players are in for two bullets, but have locked up $6,505.10 already and have eyes on the $192,036.92 first prize. There are three Russians in the top five in the counts. Spraggy was the last Team Pro standing. He took $434 for 330th place.

Nobody is going to accuse Steve O’Dwyer of being a quitter. He’s won $23 million in live tournaments, including High Rollers and Super High Rollers across the world, but now O’Dwyer can finally say he is also WCOOP champion too.

First started playing wcoop in 2005, had just one ft ever in a dumb $109 turbo but just won the $2k for my biggest ever online cash 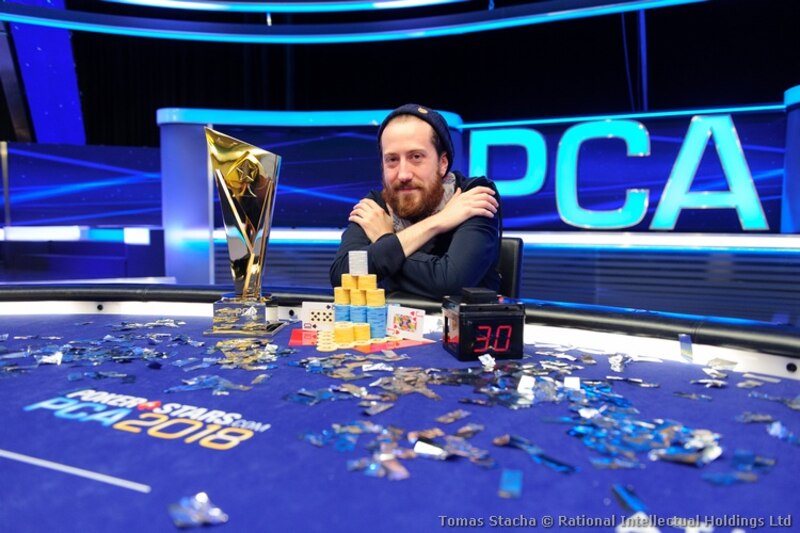 Big in Lithuania: In the $1,050 NLHE PKO, “dartazzzz” consolidated his or her position as Lithuania’s No 1, picking up $201,539.47 (including bounties), which is the highest single win of his or her career. That career is not to be sniffed at. “dartazzzz” has more than $3.7 million in online tournament scores and is currently ranked 23rd in the world on Pocket Five’s rankings.

Staples’ soul crushed: Jaime Staples finished 23rd in the $1,050 turbo, losing with aces to pocket eights. He took about $8K for his deepest run this series. But all was not lost…

Soul crushing 23rd AA<88 in the 1K WCOOP for 8K but then boooooom! Shipped the hot 215 for 10K! Seriously epic stream. Thank you guys so much (especially @RaSZi for the host.) Check him out for the 25K tomorrow. I’m passing the run good. #WCOOP @PokerStars

Phasing out: The first tournament to get under way in this year’s WCOOP is finally now over. The phased tournaments in WCOOP-01, with buy-ins at $2.20, $22 and $215, played to their winners last night. In total, there were 141,825 entries to the low buy-in, 61,085 to the medium and 11,447 to the high, which makes this tournament the biggest in terms of entrants. Everyone playing Phase 2 was guaranteed a place in the money, and “ForzaVaxholm” of Sweden took the biggest chunk.

As ever at the PokerStars tables, the “buy-in” figure you see in the client is nominal. That’s because thousands upon thousands of players qualify for major events via satellites, costing a fraction of the advertised buy-in.

This WCOOP has provided numerous classic examples of how mighty oaks can grow from the smallest acorns, and how players’ return on investment (ROI) can be ridiculous. PokerStars Blog’s Jason Kirk took a look at some of the WCOOP’s ROI-alty, which might be either the best or worst ever poker-related pun. I’m just not sure.

Felix “@xflixx” Bleickers summed up the mood of the night quite nicely:

If you’re not watching @RaSZi running deep in the $5200 #WCOOP Main and crushing @TwitchPoker records you’re. doing. it. wrong. whatever it is that you’re doing. https://t.co/ATwIt5jWhl

And as for @SalkicDino‘s new wife, it was a case of “Sorry darling, that can wait:

@ArtySmokesPS found an old post on Two Plus Two that makes interesting reading when you consider who is leading the WCOOP Main Event, and was reportedly playing nosebleed cash at the same time:

That time in 2013 when a teenager started his 10NL bankroll grind with $150. He’s now arguably the greatest cashgame player in the world. #Inspiration pic.twitter.com/rFjiedKF2G

Meanwhile Patrick “Egption” Tardif, who has been an outspoken critic of some things during this WCOOP, struck gold. In his own words, he “moaned it in”:

There were four titles for players based in the UK yesterday, which means Britons are neck and neck with Brazilians at the top of the countries leader board again. The High Roller events start today, as well as the Main finishing, so it’s totally possible they go to the wire. It is also definitely impossible for any other nation to now win though.

There are four Brits in $5,200 Main still and no Brazilians. There’s one Brit and one Brazilian in the $55 Main.

It was all about Lex Veldhuis yesterday, and it is totally worth your time to head over to his Twitch channel and watch the whole thing from the start. But if you can’t, here are a few highlights:

Lex takes on Dominik “Bounatirou” Nitsche in a pot, makes a good read and gets a fold: Lex gets aces all-in versus two opponents and…:

It had seemed to be done and dusted days ago, but a late surge from both “ImluckNuts” and Shaun “shaundeeb” Deeb have applied the pressure on Denis “aDrENalin710” Strebkov at the top of the overall leader board. None of the leaders are still in contention in the Main Events, but the last High Rollers could be decisive. This isn’t especially good news for mixed-game specialist Strebkov either as he has not won any of his WCOOP titles in hold’em events.

Here’s the latest top of the overall leader board:

Lex Veldhuis has promised to Twitch stream the $25K, so be sure to tune in.

Howard Swains
howardswains September 18, 2018 in News
Howard Swains is a freelance journalist based in London