All the latest action from the World Championship of Online Poker (WCOOP) including a rare back-to-back, the Brazilians hitting back and Spraggy backing off with pocket kings. It is day 11, here is the news.

EVERYONE HAS A LIMIT

Russia’s “Mordnilap” managed to pull off one of the rarest WCOOP feats overnight: defending the fixed limit title he or she won last year. In 2017, the limit hold’em WCOOP was a $1,050 affair, with 179 entries

Busy day for SirWatts: PCA champion Mike “SirWatts” Watson cut his teeth on the online tables of PokerStars, and he was doing what he does best yesterday. Watson is in the last six of the $2,100 Shootout, resuming 5pm ET, and is also seventh of 11 remaining in the $215 2-7 Triple Draw, which restarts three hours earlier. 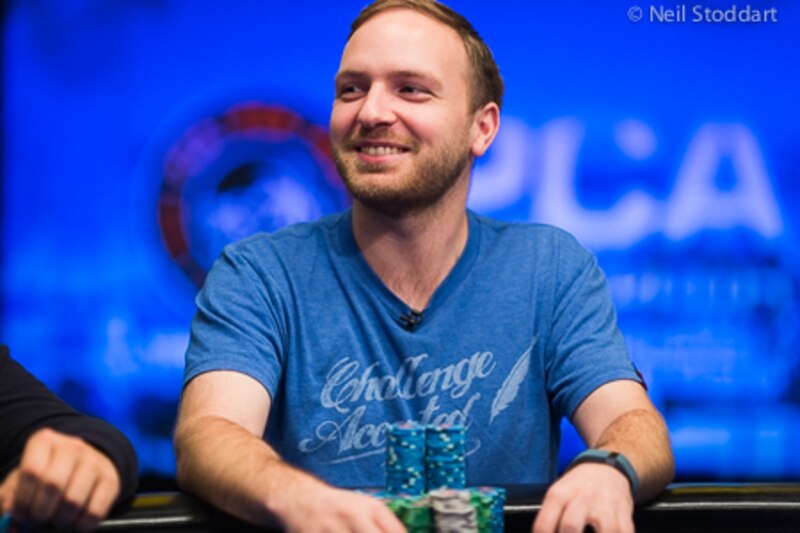 Mike Watson will be busy on WCOOP Day 12

COUNTRY OF THE DAY

Having spent a couple of days away from the summit of the countries leader board, Brazil hit back in spectacular fashion yesterday. Brazilian players won three of nine titles on offer yesterday, and were particularly dominant in WCOOP-40-M, the $55 NLHE.

Brazilians placed 1st, 2nd, 3rd, 5th and 8th–ie., more than half the final table was Brazilian. “hiran bass”, the winner, is a former SCOOP champion. 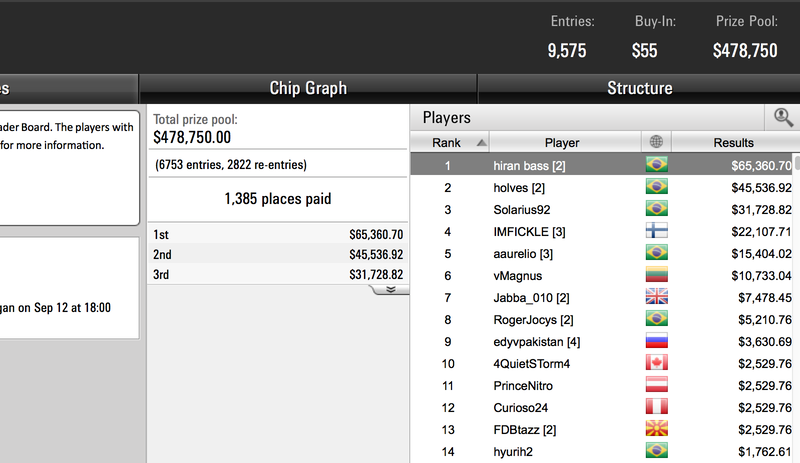 Paraguay’s “pantri” is top of the “low” buy-in leader board, despite having not even placed in the top 10 of any event. “pantri” has cashed in 17 low buy-in events. There’s an added $5,000 to winner of the leader board, plus a trophy, so this is not something to be sniffed at. (As a side note, “pantri” is also currently alive still in 2-7 Triple Draw medium, with 11 left.)

Jaime Staples is heading into Day 2 of the $215 High Roller:

I will be streaming it live tomorrow (14 hours from this tweet) https://t.co/NaXQT6a1d9 pic.twitter.com/H6TtPp4AOg

But Spraggy thinks “If you can’t spot the sucker at the table, it’s Staples”:

Try and get on Jaimes table.

Meanwhile, if you’re Greek and you’re playing @NNewtime, don’t call. He’s got it.

17th in my first #wcoop event this year, decent result. Note to self: Don't bluff Greek players! Really, really looking forward to Saturdays 1k and 109 8games, highlight of the year for me (pokerwise)

A Spraggy-heavy scan of the Twitch tables today, with the British pro showing two ways to play huge pocket pairs:

“Heavy breathing intensifies…”
Spraggy lays down pocket kings on a queen-high flop, but was he right?

“I’m gonna let this guy do something silly”
Spraggy finds aces. Does he get what he wanted?

“What am I afraid of?”
Jason “jcarver” Somerville isn’t frightened. But maybe he should be.

Although he didn’t win another title on Wednesday, Denis “aDrENalin710” Strebkov’s min-cash in the limit hold’em put him at 1,000 points in the Player of the Series standings:

Do you like Omaha, but find four cards just isn’t enough? Today’s your day. It’s the 5-Card PLO day.