It’s a case of another day, another title for the phenomenal Denis “aDrENalin710” Strebkov. The Russian picked up his fifth victory of this year’s World Championship of Online Poker (WCOOP) and again headlines today’s round-up of all the news from the tables.

What more can be said about Denis “aDrENalin710” Strebkov? We’re running out of superlatives. Before this month, nobody had won more than five WCOOP titles over the previous 16 years of the tournament series, but he has now won five in 10 days. The latest triumph came in the $1,050 Limit Stud Hi/Lo event, further emphasising his extraordinary mixed games skills. Actually, he badly needs to brush up on his no limit hold’em. “aDrENalin710” has never won a hold’em WCOOP event… 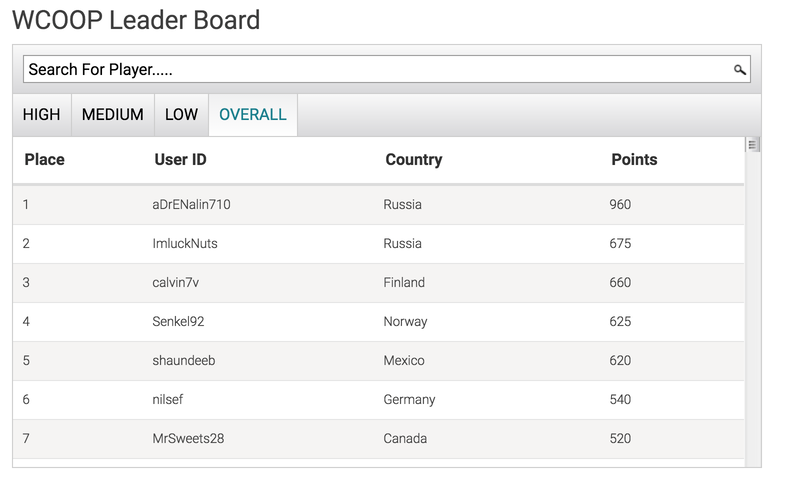 aDrENalin710 running away with the Player of the Series Leader Board

On the side: Tuesday’s big WCOOP NLHE event was billed as a half-price Super Tuesday, with a $530 buy-in. But in order to keep the regular Super Tuesday fans happy, a $5,200 WCOOP Side Event was added to the schedule too. Although not an official WCOOP event, whose results do not count for leader board purposes, it was still a fascinating tournament. It attracted 65 players and had one of the most spectacular final tables. Won by Mike “mczhang” Zhang of the UK, he beat bencd789, Connor “blanconegro” Drinan, Vikto “Isildur1” Blom, Niklas “Lena900” Åstedt, Linus “LLinuLLove” Loeliger. Zhang’s prize was $89,711.43 including bounties.

SCOOP champ adds WCOOP title: Christopher “lissi stinkt” Frank, who won the PLO 4-Max is a former SCOOP champion. The German player won a NLHE KO event in 2015–and also won a WSOP bracelet in 2017, prevailing from one of the massive $1,500 NLHE fields.

Cast your mind back to the opening weekend of WCOOP and a spectacular Sunday Million win for Romania’s “jah1923”. PokerStars Blog’s Jack Stanton tracked “jah1923” all the way to a waterfall to catch up with the $193,055.14 winner, revealing him to be an IT professional named Catalin Moraru. “It was the happiest moment of my life,” Moraru said. (About the win, one presumes. Not the conversation with Stanton.)

The best players know their weak spots, and @PhilGalfond is definitely one of the best.

I wish I was joking pic.twitter.com/U6vWPtfa6h

Feels good for @icekevin to be a medium world champion.

First day 2 of the #WCOOP for me! Not an ideal chipstack but beggars can't be choosers. $65k up top. I play for 1st starting tomorrow! #goodnight from London pic.twitter.com/7qz8DWZ4fx

COUNTRY OF THE DAY

Germany now moves into equal second place with Brazil, and one behind the UK.

As ever, there are a heap of tournaments already under way, and all are now in the money. You can head to the PokerStars client to watch all of these play to their conclusion tonight:

“Who needs to re-buy, when we can just get there?”
Two for the price of one in this clip from Jason “jcarver” Somerville as he calls two all-ins in two different tournaments simultaneously. He loses from ahead, but wins from behind.

But it’s not all good for RaSZi as he busts three $500 tournaments within five minutes (two on this clip):

Denis “aDrENalin710” Strebkov has a seeming stranglehold on the overall Player of the Series leader board already. He has 315 points more than his closest challenger.

A bit of a surprise in the low buy-in leader board, though, where Paraguay’s “pantri” has appeared. He hasn’t claimed an outright title yet, but his series of small ITM finishes has put him in with a shot at the title.

It’s a big, big day as WCOOP-43 boasts $4 million in guarantees across its three levels: $1m for the low and medium, with a $2m guarantee for the $25K. That’s behind only the main event as the guarantee of the Series.