Tiago Magalhães didn’t know what he was getting himself into this week. Literally. When he showed up in São Paulo, he had designs on winning the Brazil Series of Poker Main Event, which seemed like a good achievement in itself. He had no idea that he would end up against three former BSOP champions, have to defend the series from its first two-time winner, and endure an almost overwhelming chip deficit. What’s more, he had no idea he had a chance to win a $30,000 Platinum Pass to the PokerStars Players No-Limit Hold’em Championship.

Here’s another thing: when Magalhães showed up this week, he wasn’t the only person who didn’t know what he was getting into. Why? Because there weren’t many people there who knew who Magalhães was in the first place.

Those people all know who he is now. He is the BSOP Main Event winner, and as a result, the next contestant with a seat at next year’s PSPC. 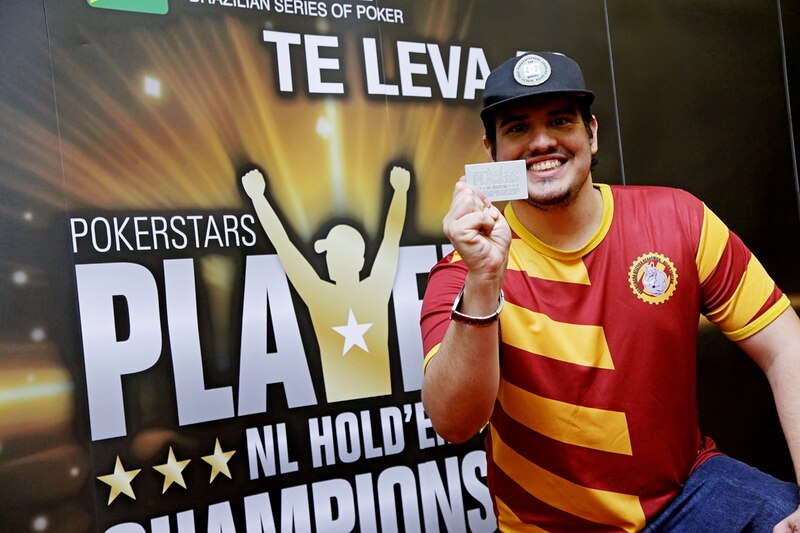 Magalhães, a 26-year-old hometown hero from the western Brazil state of Rondonia, was a relative unknown at a final table of Brazilian powerhouses. A young man with a background in civil engineering, Magalhães was an unknown face at a final table that had three former BSOP champions all with plans to be the first two-time BSOP champ.

“Not this time,” Magalhães said.

Instead of a two-time champ, the BSOP Main Event got its 103rd champion. Heads up and stuck with a daunting heads-up chip deficit, Magalhães had decided he was probably destined for a second place finish. Instead he won a title and a prize he never planned to win.

“When I came to play the BSOP São Paulo, I didn’t know that the champion was going to get a Platinum Pass,” he said.

Once in his seat, Magalhães found incentive to play harder, and it drove him all the way to his championship. With his family–who had rushed in with morale support–on the rail, the local hero found himself transported to a world of possibilities

“I never imagined playing a 25k tournament before. It’s like a dream to me,” he said. “I made it thanks to my family that came here to cheer me on”.

Magalhães’ family should start planning now if they plan to cheer him on at his next major event, because now, with his first national Brazilian title under his belt, Magalhães has set his sights on the Bahamas and the PSPC.

You can bet people will know who he is next time.