Anthony “OempaLoempah” Chimkovitch earned the biggest PokerStars cash of his career last April in the Super Tuesday. After beginning the final table as the short stack, he went on a run that gave him the chip lead with one opponent left. Then he lost all the key pots and finished as the runner-up for just under $50,000. 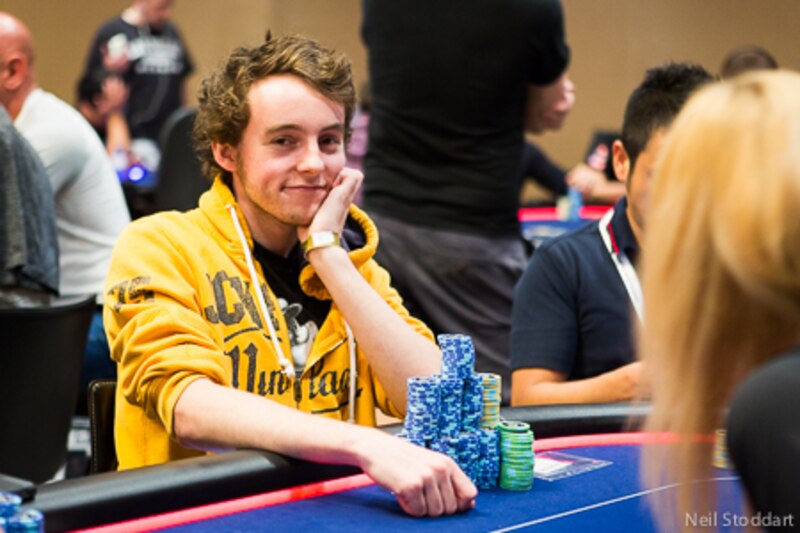 Anthony “OempaLoempah” Chimkovitch made the most of his second chance tonight

Tonight, OempaLoempah returned to the Super Tuesday final table, but this time as the chip leader. He used the lead as a cushion while two other players did most of the heavy lifting. While that left him disadvantaged heads-up against Uruguay’s jeanfranco07, he stayed patient, eventually flopping two pair out of the big blind. jeanfranco07 stayed alive for a few more minutes after losing that pot but never got any real traction, making this the second Super Tuesday in less than year to provide a new career-best cash on OempaLoempah’s tournament resume.

The eventual champion enjoyed a pretty cushy path to this week’s final table. He first claimed the lead with 63 players remaining, then claimed it again after the money bubble popped five and a half hours in. From there OempaLoempah remained the chip leader as the next 22 players fell by the wayside. The last of them, High Rollers Main Event runner-up jutrack of Germany, defended the big blind with A♣6♥ against OempaLoempah’s cutoff raise with A♦Q♣. They both flopped a pair of aces and jutrack check-called bets on each street as the board fell K♣A♠2♣Q♠7♠; OempaLoempah won with aces and queens and the final table line-up was set. Niklas “Lena900” Åstedt had a big enough stack to survive for a while but he was willing to put it all on the line early in pursuit of his second career Super Tuesday title. Just a few hands in he responded to LosJanosTata’s opening 36,000-chip bet by re-raising to 115,500 with Q♣4♠ in the big blind. LosJanosTata called and then checked behind Lena900 on the 10♦10♣K♥ flop. LosJanosTata called 76,020 chips after the 2♠ turn and 259,508 more when Lena900 bluffed all-in on the 2♦ river, showing down K♠J♥ for kings and tens to take the pot and eliminate Lena900 in ninth.

LosJanosTata took out another past Super Tuesday winner seven hands later. After opening for 40,000 chips in the small blind with A♦ K♠, the Hungarian player called when Vlad “dariepoker” Darie jammed for 455,655 in the big blind. LosJanosTata didn’t improve, but Darie’s A♥ 2♦ whiffed on a flopped gutshot draw to a wheel straight, and he left in eighth.

“Between the deep stacks in play and LosJanosTata’s misfortune in close races, it took nearly an hour to knock out the next player.”

LosJanosTata rivalled OempaLoempah for the chip lead now but couldn’t move ahead, despite multiple knockout opportunities over the next hour. jeanfranco07 won a critical 1.5-million-chip pot with K♥K♠ early on by flopping a set and dodging LosJanosTata’s gutshot draw with A♦Q♦. David “davaman” Lopez’s A♥Q♠ also survived against LosJanosTata, whose K♣J♠ missed another gutshot draw in losing to Lopez’s two pair. And Johannes “Greenstone25” Korsar’s 2♠2♥ held up against LosJanosTata’s 10♥9♠ in a desperate spot to double the Swede to 568,378.

Eventually davaman found himself with A♥J♥ in the big blind and, facing a button raise from jeanfranco07, moved in for 467,792 chips. jeanfranco07 called with A♠Q♥ and dodged a heart flush draw as the board ran out 9♦5♥6♥2♣A♦, taking down the pot and busting davaman in seventh.

The next knockout didn’t take nearly as long. LosJanosTata came along from the small blind with 7♦7♣ four hands later after Greenstone25 open-shoved for 408,878 chips in the cutoff. Greenstone25’s A♦9♠ turned a pair of aces on the 3♠7♥2♣A♣2♥ but couldn’t compete with LosJanosTata’s sevens full of deuces, ending his fifth career Super Tuesday final table appearance in sixth place. Scoring three knockouts in a row just before heads-up play gave jeanfranco07 4.67 million chips to Anthony “OempaLoempah” Chimkovitch’s 2 million, with the blinds and antes still at the relatively low level of 17,500/35,000/3,500. OempaLoempah had been in comfortable chip position throughout the final table and was ready to do battle. jeanfranco07 won the bigger pots in the first 20 minutes, but then OempaLoempah won 13 pots in a stretch of 14 hands to change the course of play.

jeanfranco07 was down but not out. The Uruguayan managed to double up often enough to stay alive for the next 20 minutes but eventually open-shoved with A♦8♠ on the button when OempaLoempah held 9♦9♣ in the big blind. OempaLoempah called, the board fell 3♠5♥K♦2♦8♥, and jeanfranco07’s tournament ended in second place.

jeanfranco07’s momentum dried up at the end, but finishing as the runner-up was a worthy reward for a fine run at the final table. Meanwhile, with the win tonight, Anthony “OempaLoempah” Chimkovitch managed to earn his personal best PokerStars cash in the Super Tuesday for the second time in less than a year. Congratulations to them both!

Play weekly with the world’s best in the Super Tuesday. Click here to open your PokerStars account today.