Here’s a chance to build your bankroll in a new freeroll that combines Team Pro looking daft while trying to play football.

Each Tuesday for the next four weeks, we’ll be posting a video. We’ll then ask you to guess the answer to what is one of the more obscure questions in this summer of football.

How many goals will the featured Team Pro score after spinning eight times around a pole that they’re resting their forehead on? 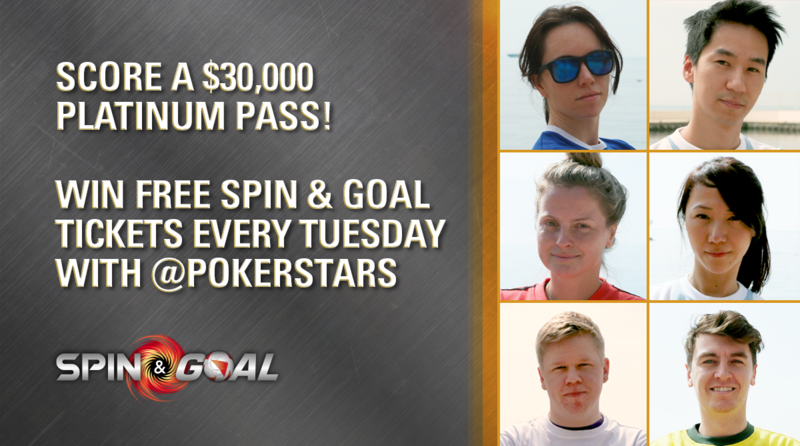 We’ll then post that answer later in the week.

By this point you might have a few questions.

Well, the Team Pro will place their forehead on the top of the pole. Then they run around the pole eight times – keeping their head resting on the pole at all times.

In other words, the Team Pro will be very dizzy by the end of it.

They’ll then have to take five shots on goal, with another Team Pro, laughing quite hard by now, between the posts trying to stop them.

Your job is to guess how many goals they’ll score.

Then tweet your answer before 23:59 ET each Thursday, using the hashtag #SpinAndGoal, and include your Stars ID.

The first week features Liv Boeree and Randy Lew, with the roles then reversed. Other Team Pros will be making appearances in the weeks that follow.

Get it right and you’ll win a ticket into the Platinum Pass Social Media Freeroll with $3,000 in added prizes. That takes place at 09:00 ET on Sunday 22 July.

Each week, 50 randomly-selected entries (correct or not) will win a $5 Spin & Goal ticket. So even a guess is better than nothing.

Then every Friday we’ll tweet the result, with the footage revealing the correct answer.

The Twitter contest is open to our open markets (see the Terms & Conditions for exact details) but we’re also running a contest on our Facebook channel to win assorted PokerStars merchandise.

That means everyone has the chance to win something.

The first video is now on Twitter, and you can see the Tweet below. Watch the first Team Pro wobble for a bit, then make your guess.

Can @Liv_Boeree keep her cool? Let's test her with Spin & Goal… literally! Tell us her score (0-5) to net a seat in a Freeroll for a $30K #PlatinumPass. Plus FIFTY random entries win a $5 #SpinAndGoal ticket. Info: https://t.co/LQEvJ70tLD T&Cs: https://t.co/cAFvjzzqPT ⚽ pic.twitter.com/pVIYaERRPg