Another $1 million guaranteed event, another star-studded final table in the 2018 Spring Championship of Online Poker.

Practically all of those making it to the endgame in this one were familiar to online poker fans. As the final table progressed — with Pedro “skyboy69” Oliveira, Ben “Ben86” Tollerene, Luke “Bit2Easy” Reeves, Craig “mcc3991” McCorkell, Andrei “ragAAila19” Boghean were among those still left — it looked likely at the end that online high-stakes star Linus “LLinusLLove” Loeliger of Austria would be the one taking the title in this Event #21-H, a $2,100 buy-in no-limit hold’em affair.

But in the end it was 2013 November Niner Michiel “utreg” Brummelhuis of the Netherlands making it to heads-up and then mounting a comeback to win the title and big $194,883.23 first prize. The money bubble burst near the end of Day 1. Of the 48 players who made it through to Saturday Tomi “elmerixx” Brouk of Finland had accumulated the most chips with just over 3.3 million, with Andrei “ragAAila19” Boghean of Romania not far behind at the top of the leaderboard.

One hour into Day 2 they were already down to 30 players, with Brazil’s Helio “hneves182” Neves having jumped out ahead of Brouk and Boghean who were still in the top three of the counts. After two hours just 19 remained, with Neves having just lost the lead to Pedro “skyboy69” Oliveira as both sat with more than 5 million.

Then Nick “TheTakeover” Schulman (13th), Tatiana “Mysters_Y” Barausova (12th), and eventually Tomi “elmerixx” Brouk (11th) hit the rail, and after a lengthy stretch of hand-for-hand play mamamamama70 went out as well (10th), with those four all earning $13,952.57.

With Linus “LLinusLLove” Loeliger having by then built a big lead and a stack of over 11.8 million, the final table was underway. 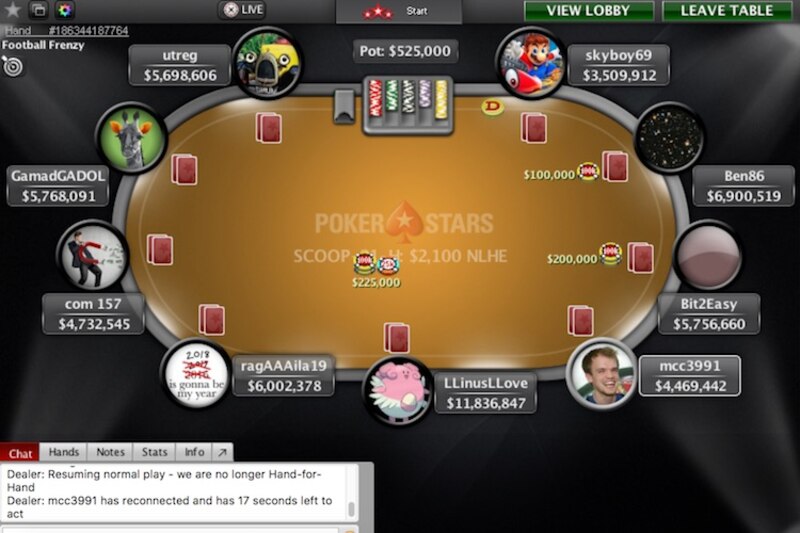 Soon after the final table began, leader Linus “LLinusLLove” Loeliger was on the button when Luke “Bit2Easy” Reeves min-raised from the hijack, and Loeliger responded with an all-in jam. com 157 was in the big blind and called to commit a stack of almost 4 million (close to 20 big blinds), and Reeves stepped aside.

com 157 had woken up with K♥K♠ and had a big preflop edge over Loeliger’s A♥7♠. But an ace fell on the flop, no other help came for the at-risk player, and com 157 was out in ninth.

Less than an orbit later Pedro “skyboy69” Oliveira raised from middle position, Loeliger jammed from the big blind, and Oliveira called all in for about 6 million total (24 BBs). Oliveira had J♣J♥ while Loeliger had A♣K♣, and a runout of K♦A♦9♦Q♥A♠ made a full house for the leader while ending Oliveira’s run in eighth. 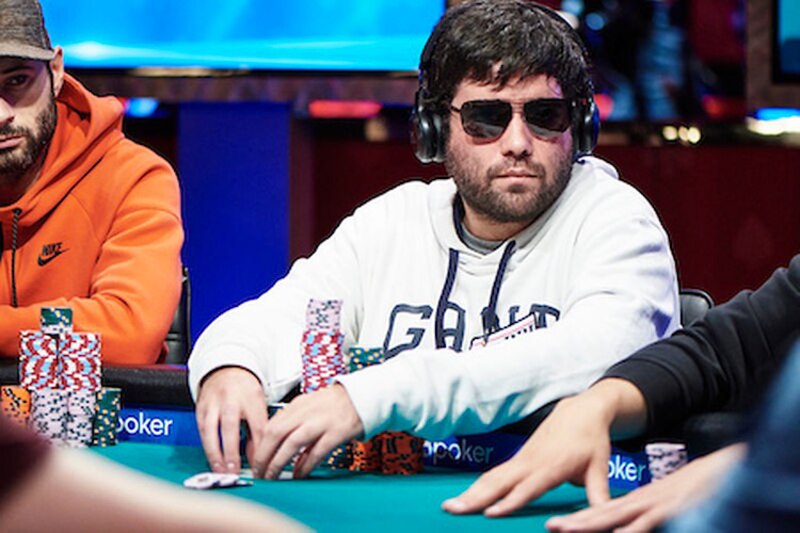 Just two hands after that Luke “Bit2Easy” Reeves was down to less than two big blinds when he raised all in with 10♥3♦, Loeliger reraised to isolate with 7♦6♠, and a board of 4♦A♣Q♥J♦7♠ made a pair on the river for Loeliger to give him another knockout, sending Reeves railward in seventh. 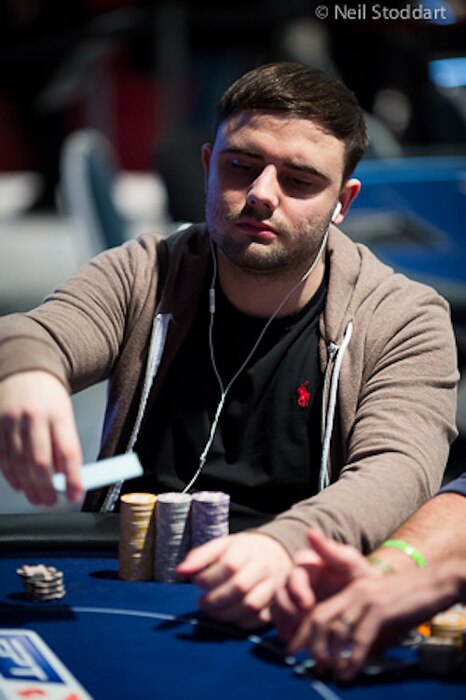 A few minutes later Loeliger had opened from the button when Andrei “ragAAila19” Boghean shoved for 3.8 million from the small blind (15 BBs), then GamadGADOL reraised all-in over that from the big blind and Loeliger got out. GamadGADOL’s A♦Q♣ then outlasted Boghean’s K♦J♠ when the board rolled out ten-high, and Boghean finished in sixth. 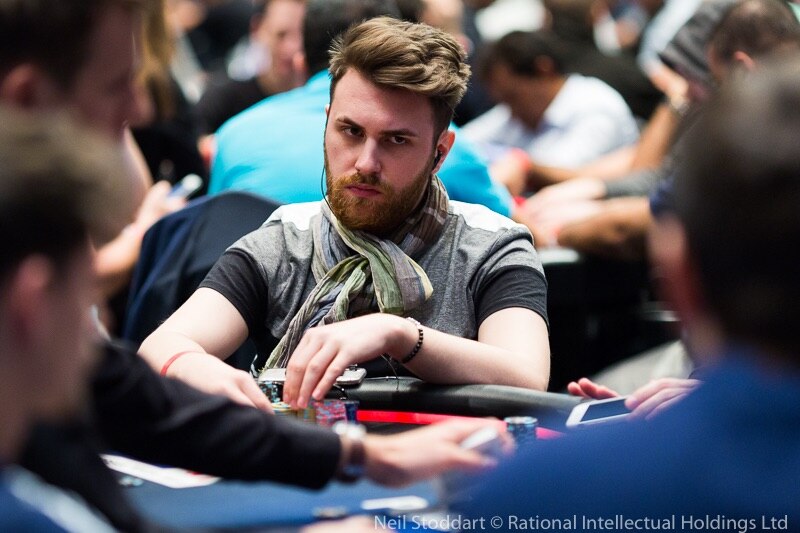 More all-ins followed from the short stacks, and eventually it was Craig “mcc3991” McCorkell three-bet jamming for 11 BBs over a Ben “Ben86” Tollerene open, then watching Loeliger reraise-shove to isolate. McCorkell had A♦9♦ and needed help against Loeliger’s Q♣Q♦, but the board came 3♠10♣6♦10♠7♠ and McCorkell was out in fifth. 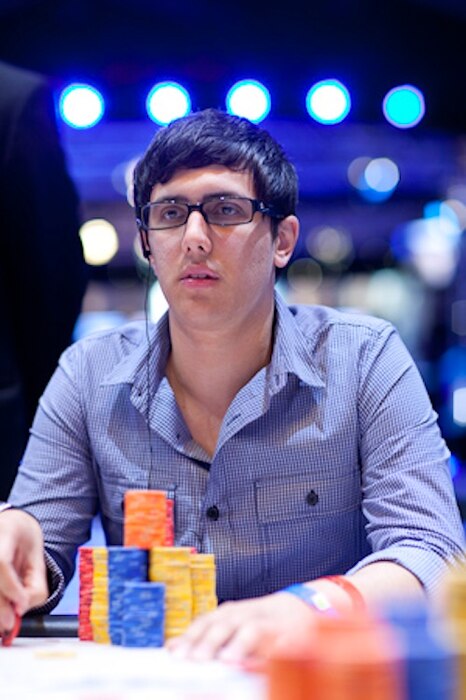 On the very next hand, Loeliger min-raised to 600,000 from the button, GamadGODOL pushed for about 9.6 million from the small blind, and Loeliger called with A♥K♣ versus GamadGODOL’s 6♠6♥. The 10♣8♥K♦5♦7♦ board LLoved LLinus, and GamadGODOL was down in fourth.

With three players left they crossed the five-hour mark for the day with Loeliger way out in front with 35.5 million while both Ben “Ben86” Tollerene and Michiel “utreg” Brummelhuis hovered just under 10 million.

In the second hand after the break, Loeliger min-raised from the button, Tollerene pushed for about 16 BBs from the big blind, and Loeliger called. Tollerene had the smallest pair with 2♦2♠, but Loeliger had the biggest one with A♥A♠, and when the board brought no deuce (and in fact an ace), Tollerene was out in third though still earned a handsome six-figure score. 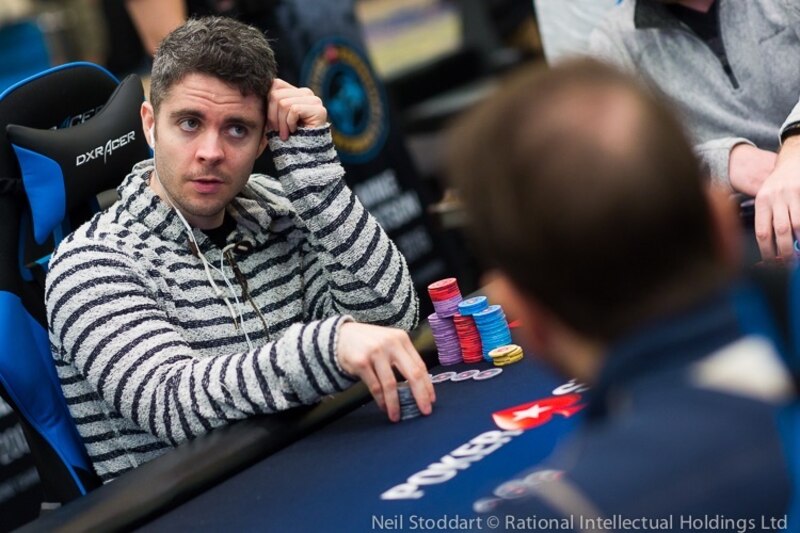 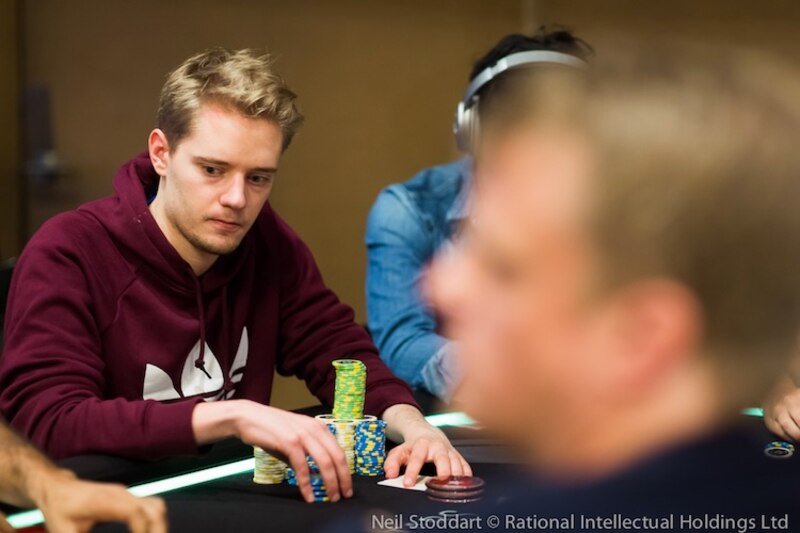 But Brummelhuis quickly began chipping up, then won a big preflop all-in with king-queen versus Loeliger’s pocket nines to grab a small chip lead.

Brummelhuis asked about an “even chop?” after that hand, but Loeliger said “no thanks” and play continued. The lead changed hands a couple more times, then Loeliger slipped down to about 9 million (about 25 big blinds) when the following hand took place.

Loeliger opened with a min-raise to 700,000 from the button, and when Brummelhuis shoved over that Loeliger called to put himself at risk.

Both had aces, but Brummelhuis enjoyed the better kicker, and that second card would play after the community cards came 4♠10♥3♦3♠A♥. After Loeliger appeared in control for most of the final table, Brummelhuis had snuck in at the end to grab away the title.

After receiving the usual congratulations from the host, the Dutch player had a final comment on how things went for him in the end.