In the storied history of the NFL, this year marked the first time both conference championships were decided in overtime.

In the NFC, the LA Rams picked off the New Orleans Saints 26-23 in OT thanks to a controversial no-call that Saints fans will be talking about for the next hundred years. 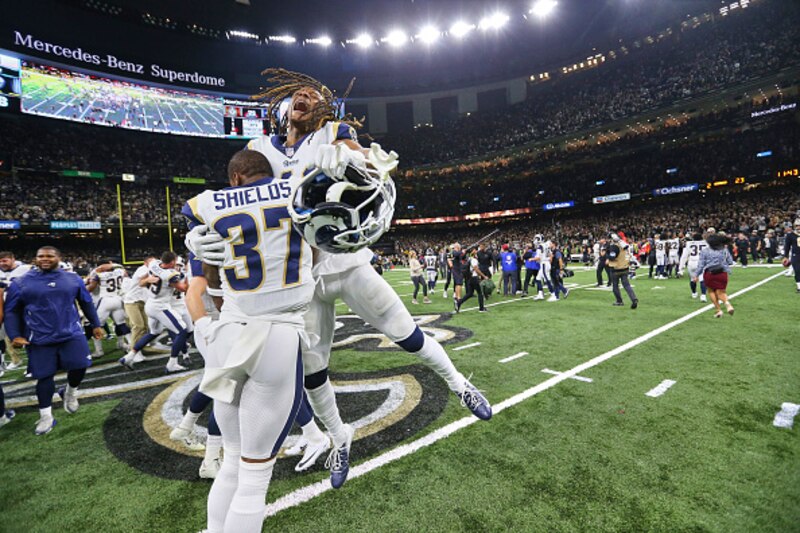 Meanwhile, the New England Patriots won the AFC again. They held off Patrick Mahomes and the Chiefs 37-31 in OT to advance to the Super Bowl for a third year in a row.

LA Rams 26, New Orleans Saints 23 (OT)… The Saints were robbed. They were the better team in the NFC title game and should be headed to Atlanta to play the Patriots in what would have been dubbed the Old Man Bowl between a pair of 40-year old quarterbacks. Alas, they blew it and put themselves in a position for the game to get stolen from them by one of the worst no-calls in professional sports history. So much for those “Super Bowl is rigged for Drew Brees” conspiracy theories (Rams were 0-8 against the head ref). Because if that were true, there would have been forty flags thrown on the Lewis/Robey-Coleman play.

The game started out like it was going to be a blowout. The Rams couldn’t hear each other in the huddle and Jared Goff couldn’t hear the play calls in his helmet. The Saints should have been up 21-0, but they failed to convert a couple of Red Zone opportunities and settled for FGs instead. The Rams rallied in the second quarter, the crowd lost their enthusiasm, and the Saints’ offense disappeared. The Rams hung on and trimmed the lead to 13-10 going into halftime. Throw out the terrible first quarter from the Rams and they outscored the Saints 23-10 the rest of the game.

The Rams relied more on CJ Anderson than Todd Gurley (time to check the forums for those Gurley conspiracy theories) in the second half, but Gurley scored the only rushing touchdown of the game. Jared Goff (297 yards, TD, 1 INT, 75.1 QBR) more than held his own against Drew Brees (249 yards, 2 TD, 1 INT, 60.1 QBR). Gurley/Anderson combined for only 54 rushing yards, but that ended up better than Kamara/Ingram’s 46 combined rushing yards. However, Kamara did all his damage with 11 receptions and 97 receiving yards. The Rams held Michael Thomas to only 46 yards and zero touchdowns. But they totally know they got super lucky with the no-call.

In a year in which kickers were crushed by variance, this game was decided by Greg the Leg. Zuerlein kicked a 48-yarder to send the game into overtime and then connected on a 57-yarder in OT that would have cleared another ten yards or more. Los Angeles is a bandwagon city for its sports teams and new fans will be coming out of the woodwork over the next few days. At the same time, a tidal wave of New England haters will be rooting for the Rams because they can’t stand to see “Tommy Boy and Belicheat in another *@#$%&! Super Bowl.” Expect a run on Rams fan gear. Where can I get my CJ Anderson jersey?

If the Rams win, these refs are gonna be run outta town with torches and pitchforks because of this no call on a clear Pass Interference #NFCChampionshipGame #LARvsNO pic.twitter.com/mwFGurxgcz

New England Patriots 37, Kansas City Chiefs 31 (OT)… You had a bad feeling this game would end up with the Patriots winning ANOTHER AFC title and going to the Super Bowl AGAIN. Three in a row now, and Tommy Boy delivered once again. He didn’t let the up-and-coming Patrick Mahomes stand in his way of another trip to the Super Bowl.

The Pats were awful on the road this season yet pulled out the OT victory. In the rematch of an early-season thriller that saw 83 combined points, every bookie from Fall River to Danbury expected another shootout. Even when early weather reports indicated freezing conditions, that did not deter everyone who kept pounding the over. I doubt anyone thought the game total would still hit the over with the Chiefs not scoring a single point in the first half. The Chiefs saved their scoring for the second half when Mahomes and the offense awoke from its slumber and finally figured out a way to attack the field. The Chiefs exploded for 31 points in the second half, including 24 in the fourth quarter. Yet somehow the Patriots held on for the victory. Again.

The Patriots ran all over the Chiefs and their three-pronged RB attack gave them headaches all night. Sony Michel (113 yards, 2 TD) and Rex Burhkead (41 yards, 2 TD) combined for four touchdowns. James White contributed 49 receiving yards and 23 rushing yards. Just when you thought Gronk was washed up and headed to the WWE for a second act, he stepped up with six catches for 79 yards. Gronk didn’t get into the end zone, but he outplayed the Chiefs’ Travis Kelce (3 receptions, 23 yards, 1 TD).

The big controversy in this game surrounded the overtime rules. A red-hot Mahomes didn’t get a chance to have last licks and the Chiefs offense did not take the field once in overtime. This outcome will be used as evidence why the current rules should be modified to include equal possessions, or college OT rules should be adopted. Alas, a coin flip determined the outcome of the AFC title game. The Patriots called heads, which is something they always do, and they won the toss. The Pats got the ball first and knew they could not settle on a field goal. They had to go all the way for a touchdown, which would be the only way to keep Mahomes off the field. Brady engineered a 75-yard winning drive in OT that adds more ammo to Tommy Terrific’s GOAT argument.

They won the coin toss. Then the game.

Every play from the OT drive that sent the @Patriots to the @SuperBowl! #SBLIII #NFLPlayoffs pic.twitter.com/iyGCYeTYSx

Belichick edged out Andy Reid once again, and Reid will forever have to play the odd coach out. Reid is Tito Jackson to Belichick’s Michael and he’ll never outshine his superstar sibling.

The Patriots are 5-3 in the Super Bowl during the Brady/Belichick era. Belichick lost two potential rings to the New York Giants thanks to heroics from Eli Manning. Patriots fans will tell you they were a bad beat or two away from a perfect run. Then again, you can’t run this good for this long without skill and timely luck. The Patriots head into Super Bowl 53 as the favorites. Again. After all, they’ve been there eight times before.