In the Game of the Year (GOY) that was also being hyped as a Super Bowl 53 Preview, the LA Rams beat the Kansas City Chiefs in a sensational shootout. The final score was 54-51 in a back and forth battle for the ages in a game that felt like it was almost scripted by William Goldman. 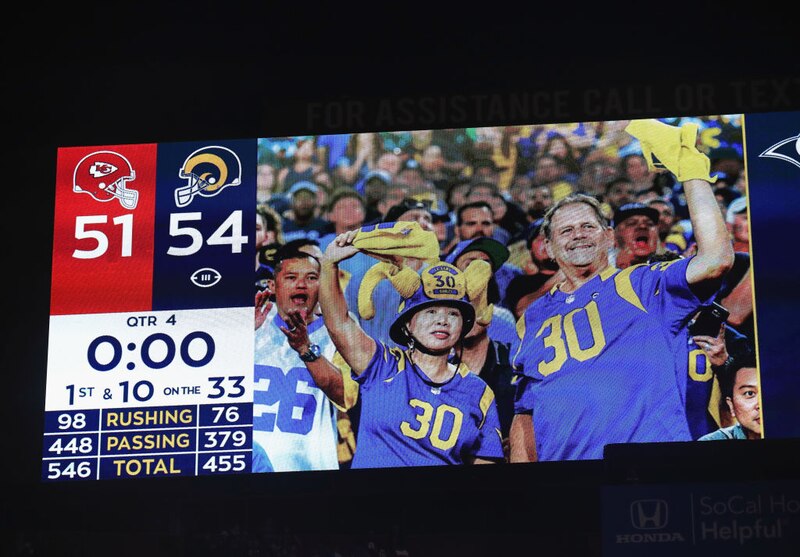 Another wild week in the NFL during Week 11. The Chicago Bears obliterated the visiting Minnesota Vikings and the red-hot New Orleans Saints destroyed the Philadelphia Eagles. Lamar Jackson got the start for the Baltimore Ravens and after a sizzling debut, we remembered why he won the 2016 Heisman trophy. Andrew Luck is finally looking like his old self with another three-touchdown performance for the surging Indy Colts. The Pittsburgh Steelers gutted out a comeback win in Jacksonville. The Denver Broncos stopped the LA Chargers’ winning streak, and unfortunately, Washington Redskins QB Alex Smith most likely suffered a career-ending injury against the Houston Texans.

LA Rams 54, Kansas City Chiefs 51… The MNF Relocation Game after the crappy grass incident in Mexico City lived up to the hype as Game of the Year. It was a scintillating shootout from the get go with 46 points in the first half (plus two blown XPs). The final over/under total settled at 64. It wasn’t much of a sweat. The over hit with 17 minutes remaining. A slew of lucky punters got unstuck with the easy over in this free money shootout. The lead changed four times in the 4Q and the Rams edged out the Chiefs 54-51. Patrick Mahomes threw three picks, but finished with 6 touchdowns in the loss. Jared Goff tossed 4 TDs and ran for another in the victory. Rams linebacker Nnamaka Ebukam scored two key defensive TDs. When the dust settled at the LA Coliseum, we saw the most points ever on MNF and the third-most points all time. Plus, it was the first time in NFL history where both teams scored 50 points. I really hope these two explosive teams advance to the Super Bowl because we might see our first 100-point finale.

MCCARTHY SLEEPS WITH THE FISHES

Seattle Seahawks 27, Green Bay Packers 24… In a quick turnaround week, the Packers (4-5-1) lost a Thursday Night Football game to the Seahawks (5-5). The postseason aspirations for the Packers are quickly slipping away. Head coach Mike McCarthy’s days at Lambeau Field are numbered. Instead of Aaron Rodgers heroics, Russell Wilson threw a game-winning touchdown. The Seahawks won the war of the trenches with 173 rushing yards versus the Packers’ 48. Chris Carson and Rashaad Penny combined for 129 yards and a touchdown, while the Seahawks held Aaron Jones to 40 yards.

New Orleans Saints 48, Philadelphia Eagles 7… Not a fun day in Philly as the Eagles fell to 4-6. Carson Wentz threw three interceptions and looked like a dazed frat boy trying to make sense of a three-day Phish festival. You gotta love it when the Saints (9-1) run up the score in a game you hammered the over total. The Saints offense runs on only one speed. Super-turbo. Drew Brees made fantasy owners drool with 363 yards and 4 more touchdowns. Mark Ingram added two scores, and Alvin Kamara another. Michael Thomas found the endzone (again), but rookie Tre’Quan Smith finally earned his stripes with a career day (10 catches, 137 yards, and TD). Brees told the rookie he trusts him, which is why he made 10 receptions and a red zone TD.

FOUR IN A ROW FOR DA BEARS

Chicago Bears 25, Minnesota Vikings 20… The Monsters of Midway (7-3) gobbled up the Purple People Eaters (5-4-1) on Sunday Night Football. Kahlil Mack was a one-man wrecking crew. Again. This game was really more lopsided than the final score. Kirk Cousins got picked off twice, but so did Mitch Trubisky. The Bears won an ugly game, but they’ll gladly take the W. Bears kicker Cody Parkey got his mojo back and nailed all three kicks.

Pittsburgh Steelers 20, Jacksonville Jaguars 16… The Jags (3-7) blew a 16-0 lead at home. The Jags should have won this game, but they let Blake Bortles get in the way of a big win against one of the top teams in the AFC. Bortles was sacked 6 times and he only threw for 104 yards as the Jags collapsed in the second half. The Steelers (7-2-1) hung on and gutted out a comeback win. Down 10 late in the 4Q, Big Ben led the Steelers to victory.

WELCOME TO THE SHOW, LAMAR

Baltimore Ravens 24, Cincinnati Bengals 21… The Ravens (5-5) won a fierce division game with their quarterback Joey Flacco sidelined, but second-year backup Lamar Jackson was ready for his first start. In his debut, Jackson rushed for 117 yards and unknown running back Gus Edwards (rookie from Rutgers) torched the Bengals for 100+ yards. Jackson finished with 150 passing yards and one pick. The Bengals (5-5) had zero running game (Andy Dalton was their leading rusher with 29 yards) and without A.J. Green, the passing game was held in check too. Dalton finished with only 211 yards.

MAMA PAJAMA ROLLED OUT OF BED

Indianapolis Colts 38, Tennessee Titans 10… The Colts (5-5) won five games in a row and are now legit challengers for the AFC South title. The Titans’ (5-5) offensive woes continued. QB Marcus Mariota left the game with a stinger. Even the best D in the NFL (18.6 ppg allowed) could not stop Andrew Luck and the Colts. Frank Reich has the Colts offense humming. They scored 24+ points for the seventh game in a row. That also coincides with Luck’s streak of at least three TD passes in seven straight games. The dynamic duo of Luck and T.Y. Hilton (155 yards, 2 TDs) got back together and harmonized like Simon and Garfunkel in Central Park.

Houston Texans 23, Washington Redskins 21… The Texans (7-3) held on for a win in DC. The Skins (6-4) are in trouble and don’t know how much longer they can hold onto first place in the NFC East. Send your thoughts, prayers, and Vicodin to Alex Smith, who got Theisman’d in a gruesome leg injury. The spooky thing about the injury was that it happened on the same date as the infamous game when Lawrence Taylor snapped Theisman’s leg. Instead of showing the tragic video of Smith’s mangled leg, here’s a video of cats performing Depeche Mode

LIVE AND DIE BY MCMANUS

Denver Broncos 23, LA Chargers 22… The Chargers (7-3) should have won this game. But they let it slip away in the 4Q. Phil Rivers threw for 401 yards and 2 touchdowns, but did not overcome 2 interceptions and poor decisions down the stretch. The Broncos (4-6) snapped the Chargers’ five-game winning streak and won on a last-second field goal by Brandon McManus. The Broncos RB tandem – Philip Lindsay and Royce Freeman – combined for 102 yards and 3 touchdowns.

Dallas Cowboys 22, Atlanta Falcons 19… What a difference a week makes. It was not even a fortnight ago that Jason Garrett was a dead man walking in Dallas. But now, the NFC East is in play. The Cowboys (5-5) won two in a row. Both on the road too. The Falcons (4-6) didn’t get into the endzone until the 4Q when Julio Jones scored a TD. The Cowboys kept Matty Ice in check and Brett Maher avenged a shank a month ago with a game-winning FG. The Cowboys host the Skins on Turkey Day and the Skins are so desperate for a backup QB, they gave Mark ‘Butt Fumble’ Sanchez a call.

Detroit Lions 20, Carolina Panthers 19… Down a point late in the 4Q, Panthers head coach Riverboat Ron Rivera acted more like Game Theory Ron and went for the win and a two-point conversion. Cam Newton (357 yards, 3 TDs) failed to execute and the Panthers lost an ugly game in the Big D. The Lions (4-6) snapped a three-game losing streak.

New York Giants 38, Tampa Bay Bucs 35… The Giants (3-7) won two in a row. Rookie Saquon Barkley scored three more touchdowns and he rushed for 142 yards and 2 scores. Eli and ODB are BFFs again after a TD. The Bucs’ (3-7) quarterback saga continues. FitzMagic got benched after three picks. Jameis Winston put on his cape and thrust the Bucs back in the game with three touchdowns off the bench. Alas, too little and too late for the Bucs.

LIFE IS FULL OF MISFORTUNES

Oakland Raiders 23, Arizona Cardinals 21… The Raiders (2-8) stole a win in Arizona on a last-second field goal to halt a five-game skid. Josh Rosen threw three touchdowns including two to Larry Fitzgerald, but the rookie also fumbled once and threw two interceptions. The Cards (2-8) lost a game they should have won. Derek Carr and head coach Jon Gruden bickered on the sidelines several times like a married couple arguing about take out food, but Carr (2 TDs) led the Raiders down the field in crunch time to set up the game-winning FG.