Put down your pen, Aleeyah Jadavji. You’re playing in the #PSPC

A year ago today, Aleeyah Jadavji was shopping for toys. Jadavji sometimes dresses as a panda–which, for reasons I can’t explain, actually seems pretty normal when compared to her contemporaries in the poker media–so, some heavy toy shopping, the kind that fills up the back of an SUV, isn’t all that surprising. What might have surprised some folks who don’t know her well was that she was shopping for holiday charity.

In the middle of a holiday season, the charitable spirit isn’t all that uncommon. But the very next day, Jadavji took it to the next level. She teamed up with her poker reporting partner Adam Lamers to host a charity fundraising stream. They hoped to raise $5,000. They ended up with $25,000, a figure matched by three poker pros. That’s $50,000 and a whole bunch of toys for charity in the span of just a few weeks.

Jadavji had no way of knowing that the $25,000 she and Lamers raised that December would be the exact buy-in of a tournament she’d be playing a year later.

Aleeyah, I’m sorry, but you can’t report on the PSPC this year. Because you’re going to be playing it. 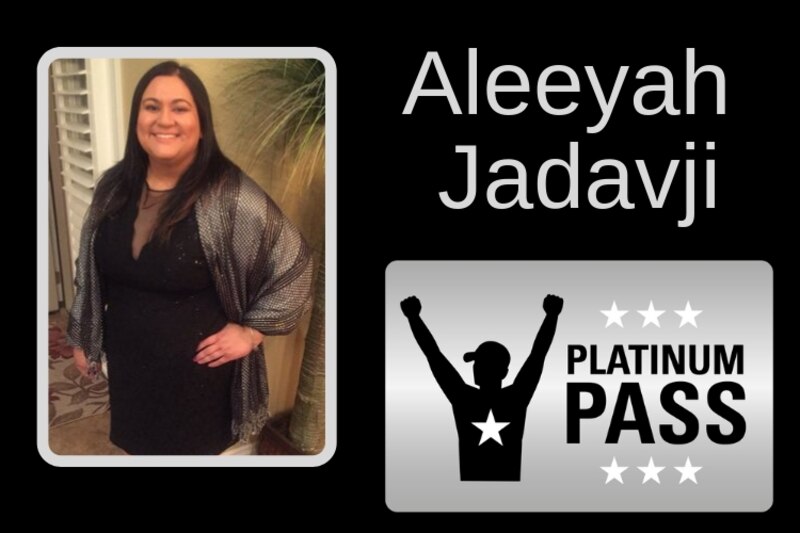 Jadavji was one of dozens of poker media members who were nominated by their friends and peers to receive PokerStars’ Platinum Pass giveaway, a gift that equates to a trip to the Bahamas, a stay at Atlantis, and the $25,000 buy-in to the PokerStars Players No-Limit Hold’em Championship.

From those many nominations, a five-person panel reduced the nominees to Jadavji, PocketFives’ Lance Bradley, Kevin Mathers, Cardplayer Lifestyle’s Robbie Strazynski, and Pokerfuse co-founder Nick Jones. That shortlist was handed over to an independent judge outside the PokerStars’ walls. This afternoon, that judge announced that while every one of the nominees would have been a worthy recipient, Jadavji won out in the end.

At the end of 2017, Jadavji said she had just completed one of the best years of her life. “No regrets. Just lessons,” she wrote.

She had no idea the kind of lessons she would learn in 2018.

She rushed from poker room to poker room and spent more than anyone’s fair share of time looking for new ways to make keto food as part of a year-long health improvement plan, a big part of which was Jaime Staples’ Ultimate Sweat competition.

There is a sort of sick irony that a woman who spent her entire year working on her health had to go to the doctor in September to learn she had cancer.

As summer came to an end, Jadavji learned she had a large cancerous tumor in her abdomen, one too big to surgically remove, one that would require months and months of radiation therapy to shrink.

When she announced it to her friends, she told the story straight, said she would continue on her travel schedule, and then issued only one mandate: “Good vibes only.”

And so, she did what she said she would do. She hit the road. She worked, defying time zones, and defying the imaginations of people who couldn’t comprehend what it meant to wake up every day to cancer. Jadavji continued to ignore any hint of negativity.

“Life won’t always be easy, but it helps to appreciate all of the good,” she wrote.

By late October, she was still rolling, and if the easily offended will turn their eyes for one line, we can all get a sense for the attitude she had adopted:

“Go fuck yourself, tumor,” she wrote.

At Run it Up Reno, you would have had a hard time knowing anything at all was wrong with her. She was smiles, conversation, and forthright positivity. When she got home, she learned that the treatments were working. The tumor had already shrunk by more than 25%.

By November 26, after weeks of f-bombs, Jadavji admitted she was starting to feel it a little. No one could blame her. She was keeping a rock star’s travel schedule, undergoing radiation therapy, and living with the knowledge that her fight wouldn’t be over soon. Nevertheless, she started planning for 2019 while having no idea how her’s would begin.

Within the last two weeks, the fatigue started to set in hard. Jadavji’s young body started to feel ancient. No amount of sleep would be enough. She could’ve been forgiven for tuning out for the rest of the year.

So, what did she do?

Because that’s what Aleeyah Jadavji is all about. She ended last year with a month of charity work. She spent the last half of the year fighting cancer, waiting on a surgery date…and doing charity work.

Indeed, there were many worthy candidates for the poker media Platinum Pass, but it would’ve been hard for a judge to find one with more fight.

With that in mind, Aleeyah, if you could take a short break from your charity fundraising and inspiring series of cancer-targeted f-bombs, PokerStars would like to cordially invite you to come play poker for millions of dollars.

And, because this is for you, we’ll relax our editorial guidelines for a day and join you in group refrain in your honor.

See you in a few weeks, Aleeyah.