If you’ve ever played a musical instrument, you’ll know immediately where I’m headed. Maybe you pick up a guitar – you learn a G chord, a C chord, and a D chord. Well, those three chords will get you through a few thousand songs, but you branch out, learn the A and E, toss in a couple of minor chords, a D7… and quickly you realize, “I’m never going to completely learn this instrument.” Which is both a curse and a blessing. You know you’ll never learn it all (not to mention mastering what you’ve learned) but then again, you’ll never run out of new skills to learn, practice, and enjoy.

It was late night in a $1-3 no-limit hold’em game in a casino somewhere in the United States. And if the villain in this tale is reading, congratulations sir, you’re about to see my hole cards.

Everybody knows the rule about looking for the fish at the table (“If you don’t see him in 30 minutes, it’s you”). But I also want to spot the shark at the table. Didn’t take long to spot him – tall young guy in the #1 seat, two to my right. Which was good because he was making people’s lives miserable. He had a giant stack of green quarters ($25 chips) in front of him and was mostly engrossed in some movie on his phone. But often enough, couple of times an orbit, he’d glance up, bomb the pot, take it down, and go back into his movie.

There was another guy who kept opening to $10 in front of him. MovieKid would make it $30, the original raiser would call, then check-fold when MovieKid dropped two green chips into the pot. “Good thing I’m on his left,” I thought.

Not too long after I got to the table, I raised to $18 in the cut-off with two black sixes after a few limpers, including MovieKid. Just two of ’em called, including him. Flop came ace-high all hearts. They checked, I bet $35 and just MovieKid called. $125-ish in the pot. Turn was a fourth heart. We both checked. River was a black three or its moral equivalent. 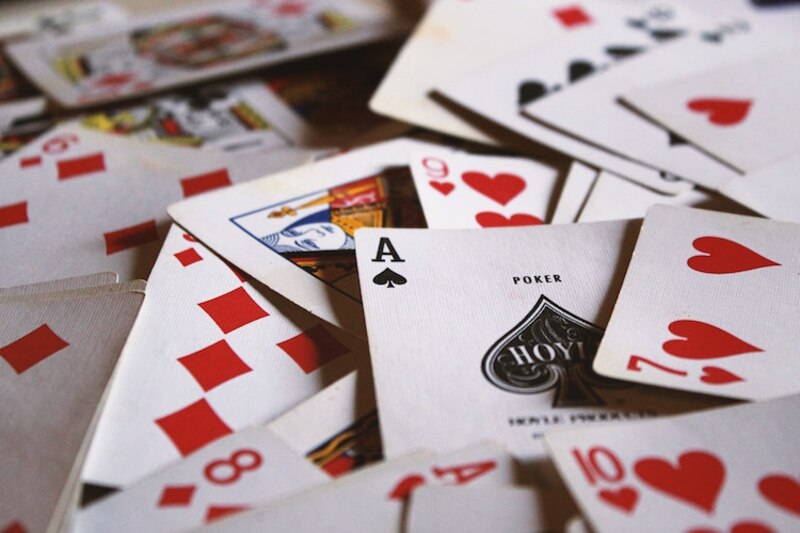 It was a properly wee hour when MovieKid limped in with a handful of others and I made it $20 with Q♠J♠ on the button. They all folded except MovieKid, last to act in front of me. He just glanced up from his movie and tossed two quarters on top of the three white $1 chips. “$53 total” yawned the dealer.

I had $700 or so in front of me, and he had me covered. Q♠J♠ is not a premium hand, but he didn’t need to have a premium hand neither. He’d given me a real good price to call. And I had that white plastic disc that said “Dealer” on it. I called.

Flop came K♥J♦2♠. Three quarters tumbled onto the felt, and he didn’t even bother to look up from his movie – I think he thought the hand was over. Only it wasn’t. See, I’ve been reading Ed Miller (you should read him too); he talks about skills it takes to move up in stakes. One of them involves calling people like MovieKid when you don’t have a lot of value yourself. It’s scary, and sometimes it fails spectacularly, but when the time is right you gotta do it. I called.

Turn card was the 9♠. Pretty much my gin card. “Two-seven-five” said MovieKid and put out eleven green wagering discs to prove it. I’d already planned on that bet and knew what I was going to do. See, it was time to try that new B-minor barre chord that I’d been working on. Or in this case, taking a stand with a hand that was crushed by what he claimed to have, anyway.

I paused the appropriate amount of time, then said “I’m all in,” as I slid out my less impressive stack of quarters. Now he put the phone down again. That was a good sign. I was half-expecting him to snap-call with his set of kings, and I’d be trying to hit one of nine-ish outs. But once the phone went down, I liked my chances.

I did a quick count (I already knew the ballpark number but like to be accurate in these situations). “$342 unless you want to leave me $2 for cab fare.” He didn’t like it. He thought. I think he stared at me, but I was staring at the king of hearts so I can’t be sure. Finally, he tapped his cards on the table and tossed them into the muck.

I don’t make that kind of play very often, and like I said, it’s hard on the nerves the first few times. But if you’re going to play all the chords on the guitar, or win when there’s a player like MovieKid at the table, you have to stretch your fingers and your poker skills.

Postscript: Not too far later, I cold four-bet MovieKid over the top of one of his patented $30 three-bets. Everybody folded back to him, as did he. Then he got up, moved over to the #8 seat. I didn’t hear what he said to the #7 seat, but he gestured in my general direction. It pleases me to think he said, “That old guy in the #3 seat, he’s cramping my style.”