PCA 2018: Konnikova seals the deal as the Biggest Bluff pays off

The 2018 PokerStars Caribbean Adventure (PCA) is due to crown at least five major champions through its ten days of play, but it’s going to take something spectacular to just top what has happened on only day four.

Maria Konnikova, the journalist from New York, whose latest book project involves spending a year on the poker circuit progressing from rookie to pro, has just won the PCA National Championship. She beat a field of 290 players in a $1,650 buy-in event, earning close to $85,000. Konnikova also wins a Platinum Pass to the PokerStars Players Championship back in this room next January, worth $30,000.

That’s going to require an extension from her publisher. Her book, The Biggest Bluff, which will chart her journey through poker and examine the application of poker skills in the “real” world, is due in December 2018. But not only has she surely found herself a cover photo with success in this event, she has just booked herself a reporting mission for another chapter. Maria Konnikova: The journey is not even yet complete

The Players Championship will be the biggest $25,000 buy-in tournament ever held in world poker, and Konnikova will be in the field, pitting her wits against the very best. “I would never be able to afford it,” she said.

Make no mistake, today’s victory marks a startling success for someone who knew literally nothing about poker less than a year ago, but who was taken under the wing of Erik Seidel to learn the ins-and-outs of the game.

Both Seidel and Konnikova said she had studied hard, but she confessed: “I never thought that this would happen. I wanted it to, and I was working really, really, hard, but it’s just kind of incredible.”

She added: “It feels so validating to achieve this.”

Konnikova paid tribute to “the best coach in the world” and said she had been “very, very lucky to have amazing training to reach this moment”. She also thanked the staff at PokerStars, who have supported the trip from Las Vegas, through Barcelona, Dublin and Prague and now the Bahamas.

“It’s great promotion for the book,” she said. “It’s a journey and the book is about the journey so I’m really glad to have something like this.

“It’s been great having players who have been so welcoming and supportive. The PokerStars team has been beyond amazing. They have made this journey really, really wonderful.”

Seidel had been involved in a final table of his own today, taking fourth place in the $50,000 High Roller event. When he got the chance, he had been texting strategy advice to Konnikova, helping her to overcome an early hit to her chip stack and navigate a table featuring some of the game’s established pros.

Konnikova saw off Chris Moorman, the most decorated player in the history of online poker, and former PCA champion Harrison Gimbel, as well as Dutch chess grandmaster Luek van Wely, at today’s final. Seidel had returned to his hotel room and missed the final moment, but Konnikova admitted that her first text had gone in Seidel’s direction.

“The second one was to my husband,” she quickly added.

We caught up with both Seidel and Konnikova ahead of play today, and that full article is below. But, well, it’s got a slight update now. Now that the rookie is the PCA’s most popular champion.

Read the blow-by-blow on Konnikova’s success.

At some point within the coming couple of years, a piece of non-fiction writing will be published that will take a place in the small library of must-read poker books. This is true even if its early promotional blurb insists it is not a poker book at all.

Instead, The Biggest Bluff, by Maria Konnikova, promises to answer a far more weighty question: “How do the skills learned at the poker table translate to the skills required to live a better, more thoughtful and, ultimately, successful life?”

What’s most exciting for anyone following coverage of the PokerStars Caribbean Adventure (PCA) today is that one of the chapters is surely being written in this room right now. Konnikova is at the final table of the 290-player $1,650 National Championship, starting the final second in chips with $84,600 on offer to the winner.

She is truly playing the world.

Konnikova is a journalist and psychology Ph.D., and a contributor to the New Yorker magazine, among other publications. Her two previous non-fiction books have also explored the fascinating interface between psychology, neuroscience and the “real” world.

In Mastermind: How to Think Like Sherlock Holmes she revealed “how the world’s most keen-eyed detective can serve as an unparalleled guide to upgrading the mind”. Her later book The Confidence Game explored “the psychology of the con”.

In some ways The Biggest Bluff is the natural next step. Under the tutelage of one of the all-time poker greats, Erik Seidel, Konnikova is spending a year travelling the poker circuit, playing in the biggest games, experiencing life at the tables first hand, and honing her poker skills in the most high-profile environment.

And yesterday Konnikova enjoyed the best day of her poker career, which brought her to today’s final. “I’m very excited and also quite nervous,” Konnikova said this morning, revealing that Seidel had offered her some specific tips on how to approach the day.

She will need the help. Konnikova is today sitting alongside the likes of Chris Moorman, online poker’s leading talent, Harrison Gimble, the former PCA Main Event champion, and Loek Van Wely, the Dutch chess grandmaster. Though both poker-master and student describe the book still as “an experiment”, this is looking very much like the real deal.

“I don’t think she was necessarily naturally suited to poker, but she’s got where she has because she’s bright and she’s open minded and she’s worked very hard,” Seidel said. “This is an important final table and there’s a lot of money at stake.” Seidel was not only full of praise for his student–“She’s been ahead of where I thought she’d be since the start,” he said–but also had plenty of enthusiasm for the book project, which he says will prove that intelligence and diligence can pay dividends in a game that for so long was not associated with those life skills.

“It’s a very exciting experiment,” Seidel said. “And I think it’ll be a great story for poker. It shows that with good thinking and hard work you can succeed at poker.”

By happy coincidence, Seidel too has a final table to attend today. He battled through to the last six of the $50,000 High Roller, which will play to its winner on the television stage this afternoon. 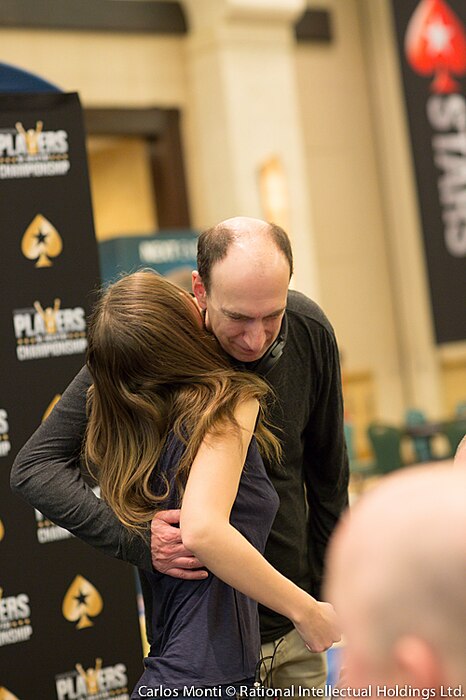 Seidel dropped by to wish Konnikova well and laughed off suggestions that there might be a rivalry between them as they both chase major titles at the same time.

“I think it’d be really awesome if she wins this thing,” he said. “I obviously have my concerns later, but I want her to win.”

We will intend to catch up with Konnikova at the end of play today, which we also hope will be as she is posing for a winner’s photo. In the meantime, you can follow Konnikova’s progress with our National Championship live coverage and Seidel’s in our $50K High Roller updates and on the PokerStars.tv live stream.