We’ve reached the midway point of the NFL season and the trade deadline has passed. The Rams are the only undefeated team left standing and they head to the Big Easy to take on the New Orleans Saints in the Superdome. The Saints avenged a playoff loss last week in Minnesota, but they face their biggest test of the season when the 8-0 Rams roll into town. 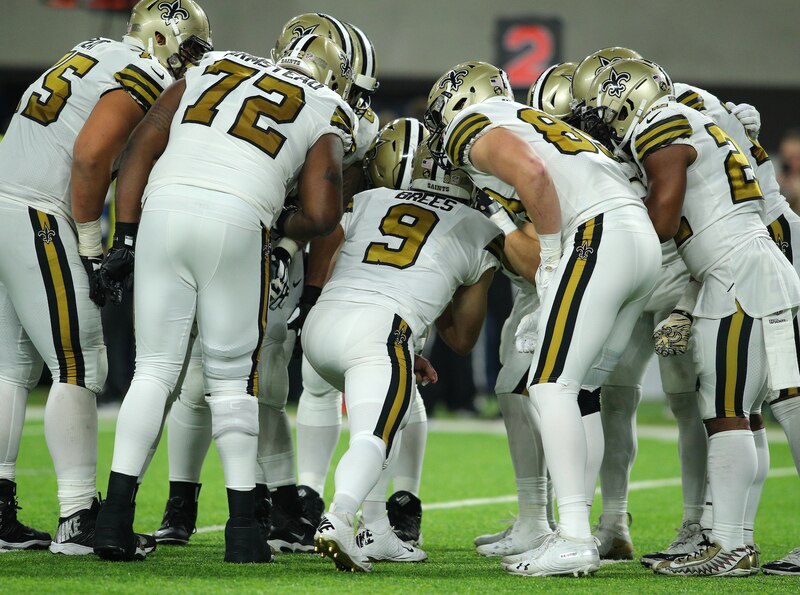 Oh, there’s 12 other games too, but it’s Rams/Saints that no one wants to miss.

GAME OF THE WEEK: RAMS/SAINTS

Los Angeles Rams (8-0) at New Orleans Saints (6-1)… Drew Brees and the Saints won six straight games and they’re looking to knock off the undefeated Rams. The revamped Saints defense will have their hands full stopping Sean McVay’s two-pronged attack with Todd Gurley and Jared Goff. The Saints have the best run D in the league allowing only 74.1 yards per game, but it’s their pass D that is their weak link. They added Eli Apple to shore up the secondary, but will it be enough? The Rams now have four first-rounders on their D line after adding Dante Fowler to the mix from a trade with the Jags.

Green Bay Packers (3-3-1) at New England Patriots (6-2)… This Sunday Night Football matchup will be hyped as Brady vs. Rodgers. After losing to the Rams by two points in Los Angeles, Aaron Rodgers takes the Packers to New England for another tough game against Tom Brady and Bill Belichick. It’s surprising that Rodgers and Brady never played more than one game against each other. Talk about a quick hook. Less than 48 hours after the disastrous fumble against the Rams, the Packers traded Ty Montgomery to the Ravens.

WHEN THE SUN MEETS THE RAIN

L.A. Chargers (5-2) at Seattle Seahawks (4-3)… With the Rams a perfect 8-0, the Chargers have flown under the radar. The second pro football team in L.A. struggles to find headlines in Hollywood with LeBron James now on the Lakers and the Dodgers in the World Series for a second October in a row. The Chargers will be tested with a road game against Seattle, which is the toughest place to play as an opposing team at deafening CenturyLink Field. Russell Wilson and Phil Rivers will go head-to-head in this gem.

MAHOMES AT THE DOG POUND

Kansas City Chiefs (7-1) at Cleveland Browns (2-5-1)… Talk about two complete opposite franchises. The Chiefs have their eye on the best record in the AFC to clinch home field advantage in the playoffs, while the Browns fired another head coach. Hue Jackson got the boot, but it’s a blessing in disguise because he will not have to prepare for this impending disaster of a game. How the point spread is not double digits is beyond me.

Pittsburgh Steelers (4-2-1) at Baltimore Ravens (4-4)… These two are vying for first place in the AFC North. The home team is always a -3 favorite in smashmouth division games like this. The Steelers are looking for their fourth win in a row and have yet to lose a game on the road this year. Big Ben and the Steelers laid the smackdown on the Cleveland Browns last week, while the Ravens are licking their wounds after a blowout against the Panthers. The Ravens are going for the season sweep after beating the Steelers 26-14 in Week 4.

Tampa Bay Bucs (3-4) at Carolina Panthers (5-2)… The Panthers are unbeatable at home this year. Jameis Winston is officially benched and Ryan Fitzpatrick gets the start. Can Cam Newton and the Panthers hold off FitzMagic? The bookies don’t think it matters who is the quarterback because the Panthers are almost a touchdown favorite.

Atlanta Falcons (3-4) at Washington Redskins (5-2)… The Falcons are 0-2 on the road this season and had the benefit of five home games. The Skins opened as a small favorite against a team coming off the bye week. Alex Smith has struggled so far as the Skins new QB, but he has an opportunity to pad his stats against a terrible secondary. Atlanta gives up 30.3 points per game, or third worst in the NFL. The Skins also added Ha Ha Clinton-Dix to their secondary after acquiring him in a trade from the Packers.

Houston Texans (5-3) at Denver Broncos (3-5)… Wait, the Texans are 5-3 and on the verge of 6-3? It hasn’t been pretty, but the Texans won five games. They had a couple extra days to prep for this game after blowing out the Dolphins on Thursday Night Football. DeShaun Watson had more time to heal his injured ribs and chest. He’s is looking to replicate his five-touchdown performance, but it will probably be Lamar Miller who gets the ball a lot. The Broncos have one of the worst run Ds in the league and allow 135.8 yards per game. The Broncos traded WR Demaryius Thomas to the Texans and now Watson has two dangerous deep-threat options with Thomas and DeAndre Hopkins.

New York Jets (3-5) at Miami Dolphins (4-4)… Sam Darnold is the only rookie QB who started every game for his team. He weathered the depletion of the WR corps and the loss of RB Bilal Powell. Darnold has a chance to win an AFC division game against the Dolphins who lost four out of their last five games. Ryan Tannehill’s shoulder injury means Brock Osweiler time in Miami.

Detroit Lions (3-4) at Minnesota Vikings (4-3-1)… NFC North battle. The Vikes are fresh off a loss against Drew Brees and the Saints. The Lions are still woozy from their 28-14 loss against the Seahawks. You can count on Adam Thielen for delivering 100+ yards of offense, but can the Vikes win by a touchdown? The Lions need a win to stay in the division race. A week after acquire Snacks Harrison in a trade, they shipped out WR Golden Tate to the Super Bowl champs.

Chicago Bears (4-3) at Buffalo Bills (2-6)… Kahlil Mack and the Bears take their monstrous defense on the road to face the limp Bills. The only highlights coming out of this one in Western New York will be #BillsMafia videos from the parking lot.

Tennessee (3-4) at Dallas Cowboys (3-4)… The winner improves to 4-4 to keep their division title hopes alive. The loser sinks deeper into despair with playoff hopes quickly vanishing. The Cowboys are coming off a bye week, which is the reason they’re favorites. The Cowboys fired their offensive line coach hoping to miraculously find a solution to the porous blocking schemes that allowed 23 sacks in seven games. It appears Dak Prescott got his mojo back, while Zeke Elliot is leading the fourth-best rushing attack in the league with approximately 137 yards per game. The Titans D is tasked with stopping the Dak and Zeke show, but they don’t have enough offense to keep up with the Cowboys.