In Week 14 action, the Houston Texans are going for ten wins in a row, while the LA Chargers and New England Patriots are seeking their tenth win of the season. Rookie QB Lamar Jackson gets another start for the Ravens, but he’ll have a tough assignment trying to keep up with Patrick Mahomes and the Chiefs. The Monsters of the Midway will try to stop the high-flying LA Rams. The Vikings and Seahawks are currently in the NFC Wild Card spots and face each other in Seattle on Monday Night Football. 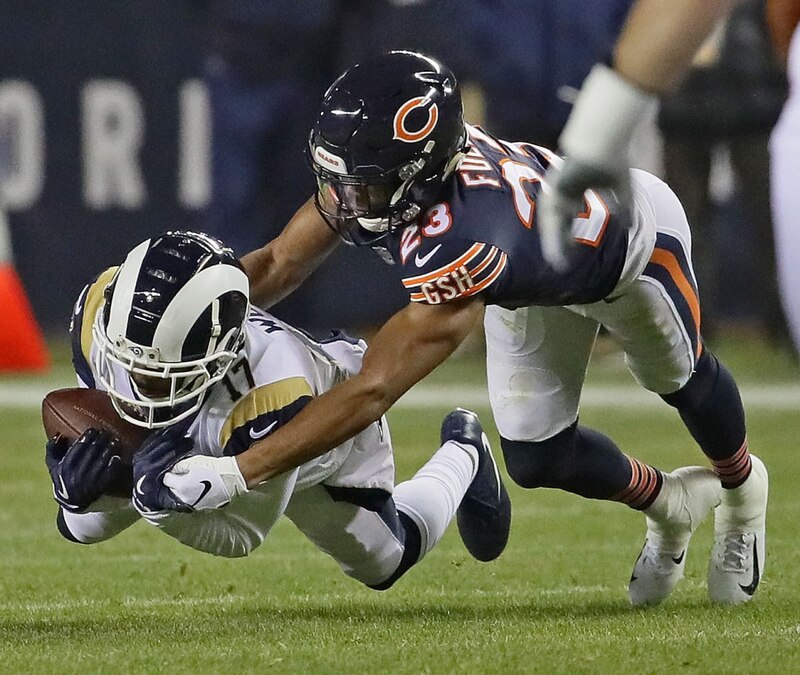 With four weeks remaining, half of the league is dunzo or on the verge of elimination. However, several 6-6 hopefuls — like the Colts, Eagles, Broncos, and Panthers — are trying to stay alive for one more week as the playoff bubble approaches. It’s do or die time. Cue the Allman Brothers Band’s “Ain’t Wasting Time No More.”

GAME OF THE WEEK: TWO PLAYOFF TEAMS ON SNF

LA Rams (11-1) at Chicago Bears (8-4)… The Bears are fresh off an embarrassing loss to the Giants. QB Mitch Trubisky is back after missing two games with a sore shoulder. The Rams have the league’s best record, but Sean McVay’s squad goes up against one of the toughest defenses, anchored by Khalil Mack. Da Bears are a rare home dog this year. It’s only a FG difference in the point spread, but this game could get out of hand real fast. Why? Sean McVay did his homework. He knows who’s been naughty and who’s been nice.

Sean McVay clearly does his homework every week.

He talked about every single Bears defender in just over a minute. pic.twitter.com/QWCKxVPdJf

Philadelphia Eagles (6-6) at Dallas Cowboys (7-5)… Fierce NFC East battle. The Eagles want a chance to defend their Super Bowl title, but the road back to the big dance goes through Texas. The Cowboys are sitting in first place in the NFC East, but by only one game. They’re riding high off a big win against the Saints and had a couple extra days to rest and prep for the Eagles. Which team will win the battle of traded WRs? Carson Wentz and WR Golden Tate finally found some touchdown love together. On the other side, WR Amari Cooper is loving his new BFF Dak Prescott.

Indianapolis Colts (6-6) at Houston Texans (9-3)… The Texans are the hottest team in the NFL with a nine-game winning streak. They have their flaws and played a soft schedule, but still manage to win week after week. The Colts were shut out by the Jags last week in their first game with Blake Bortles officially on the bench. The Colts’ postseason hopes will slowly slip away if Andrew Luck and company can’t figure out a way to prevent the Texans from winning their tenth game in a row.

Baltimore Ravens (7-5) at Kansas City Chiefs (10-2)… The Chiefs are protecting an undefeated home record at 5-0 and they’re approximately a touchdown favorite in this battle of potential playoff teams. Lamar Jackson gets the start for a fourth week in a row. If it ain’t broke, don’t fix it. Jackson’s propensity to run like an antelope out of control will inevitably catch up with him. Until that happens, Jim Harbaugh is pressing the action. Jackson is like a hot dice roll. You know you’ll crap out eventually, but you got keep the dice rolling until it happens.

Lamar Jackson puts the Ravens on the board!

THE OTHER TEAM IN LA, NO… THE OTHER ONE

Cincinnati Bengals (5-7) at LA Chargers (9-3)… The Chargers turned to rookie RB Justin Jackson out of Northwestern to get them out of a hole in the second half against the Pittsburgh Steelers. Now they’re 9-3 and sitting pretty with the top Wild Card spot in the AFC. This game should be a cake walk for the Chargers with Andy Dalton on IR. Phil Rivers and the Bolts are a favorite by two touchdowns.

New Orleans Saints (10-2) at Tampa Bay Bucs (5-7)… The Saints are coming off extra rest after getting stunned by the Dallas Cowboys on TNF last week. The Saints want a shot at home-field advantage in the playoffs, so they will not sleep on this road division game. The Bucs are a sinking ship, but it’s still filled with pirates. If Jameis Winston can’t get it done, the Bucs will roll the dice with FitzMagic. It would be fitting to see a little 4Q FitzMagic go head-to-head with Drew Brees in a shootout in Tampa.

New England Patriots (9-3) at Miami Dolphins (6-6)… Tom Brady and company do not travel well away from Masslandia. The Pats are a mere mortal, 3-3 on the road. Ah, it still looks like a Pats blowout on paper and in the film room. Home dog alert, or make that HOME FISH ALERT. Will the Dolphins give the Pats a good game? Or will the Dolphins be sleeping with the fishes? Hide your girlfriends and lock your medicine cabinet, because Gronk will be on the loose in South Beach.

IT ALL FELL TO PIECES TOMORROW

Pittsburgh Steelers (7-4-1) at Oakland Raiders (2-10)… The Raiders are fighting the Niners for worst team in the NFL not named the Jets. The Steelers are looking for a palooka to take out their frustrations after a big loss at home against the out-of-town Chargers. The Steelers will be without James Connor (thigh bruise, ankle) this game, but it won’t matter that much. The Raiders are a double-digit home dog. Again.

New York Giants (4-8) at Washington Redskins (6-6)… The G-Men shocked the world (okay, just the NY tristate area and all of the Midwest) when they beat Da Bears in overtime. That’s what happens when you send a backup into the Meadowlands. The Giants smell blood in the water against the Skins, who cannot catch a break. It’s bad enough two quarterbacks left games with broken legs, it’s a whole other bad beat to be relying on Mark Sanchez and the Butt Fumbles to hold the line in Bastogne during the Battle of the Bulge. The Giants should start ODB at QB against Sanchez. That would shake things up.

Denver Broncos (6-6) at San Francisco Niners (2-10)… The Niners are taking it easy in Tank City, while fighting for the #1 draft pick. The Broncos still have a reason to live. Rookie running back Philip Lindsay has become one of the most efficient runners in the history of the NFL with 6.08 yards per carry. Only Barry Sanders in 1997 and Jamaal Charles during his monster year in 2010 had a better rate than Lindsay. That’s some amazing company for a kid who did not get drafted.

Carolina Panthers (6-6) at Cleveland Browns (4-7-1)… The Panthers dropped four straight games and they are 1-5 on the road. Yet, Cam Newtown and CMAC are still a slight favorite in this game. Baker Mayfield has the Panthers just where he wants them, as a home dog at the Dawg Pound.

THEME FROM THE BOTTOM

New York Jets (3-9) at Buffalo Bills (4-8)… Rookie Sam Darnold will be back in the lineup against fellow rube Josh Allen. I don’t know anyone watching this game that will not be three sheets to the wind. With the LOLJets in town, Orchard Park will be extra lit this weekend with #BillsMafia hijinks. The craziness will rank somewhere between the parking lot festivities at a Phish concert and full-blown Mardi Gras, but with burning tables.

Detroit Lions (4-8) at Arizona Cardinals (3-9)… The Lions and Cards is another one of those games that legendary sportscaster Howard Cosell would dub as an exercise in futility. Next game.

GOTTA GET UNSTUCK GAME OF THE WEEK: TWO WILD CARDS

Minnesota Vikings (6-5-1) at Seattle Seahawks (7-5)… Two NFC Wild Card teams square off with two Betas struggling to hold onto their shaky postseason status. The Vikings are clawing on to the last playoff spot in the NFC with the Panthers, Eagles, and Redskins hoping they can sneak in the back door. The Seahawks’ home-field advantage (3-2) is not as strong as it used to be. The Seahawks focus on a run-first offense, which goes against the grain in the pass-happy league. But in crunch time, Russell Wilson gets the job done.

Russell Wilson and Tyler Lockett connect for the score!