The APPT HK$100,000 buy-in High Roller tournament, just like its cousin on the EPT, is quickly becoming a very prestigious tournament, and one that they all want to win. It’s packed full of the best players in the world and still attracts three-figure fields unlike super high rollers, making it a much tougher tournament to win. 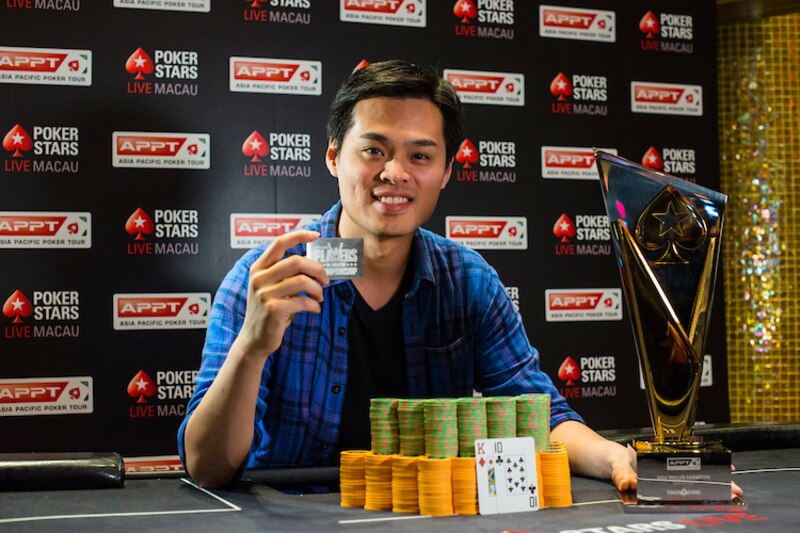 Last year’s event was a record breaker with 180 entries but this year that record was broken as 195 entires were attracted. After three day’s of action-packed play, arguably one of the best players from Taiwan, James Chen, had seen off all-comers and out-right won the first place prize of HK$4,021,000, the beautiful trophy and entry into next year’s PokerStars Players Championship (PSPC) via a Platinum Pass worth US$30,000. Chen is a fan of the PokerStars LIVE Macau poker room having already won two MPC High Rollers here in the past three years, and his final hurdle to a third title was Xin Fan (pictured on the right above), who put up a great display, but had to do with a runner-up finish for HK$2,714,000. He was a three-to-one dog when heads-up play began and was quickly ground down to the point where he had to shove with queen-ten on the button. Chen called with a dominating king-ten, flopped a king, and it was all over.

“This was only the second event I played this year after the 400k (HK$). I fired two bullets in each, but ran a lot better in this one,” a happy Chen told the blog shortly after his victory.

Then he was reminded about a certain tournament his win qualifies him for next January. “I wasn’t planning to go to the Bahamas (to play play in the PSPC), but I guess I’m going now!” 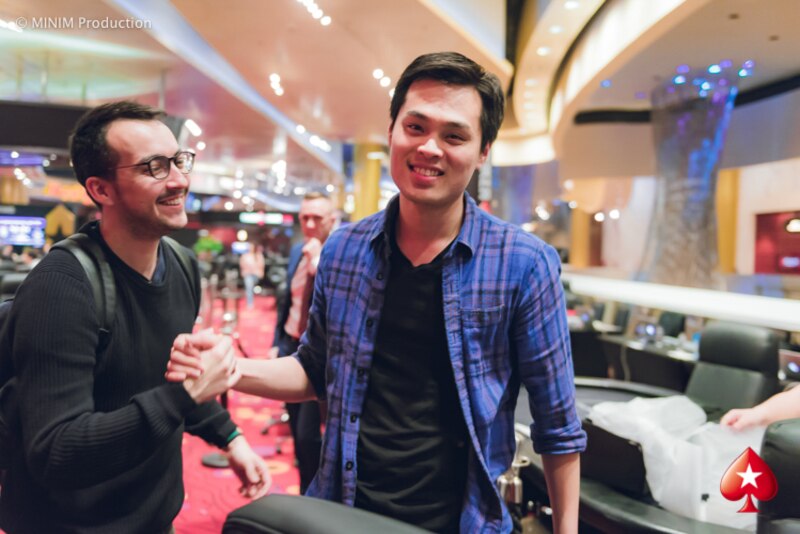 Chen celebrating with his buddy

The final day saw 14 players return, led by Kristen Bicknell, who already won the APPT Macau National High Roller earlier in the festival. Two main themes emerged as the day played out: the exits came in clusters and virtually no big/over pairs managed to hold up.

The first cluster of eliminations came quickly, in the first level of the day. Jimmy Guerrero and Xia Lin were the two to go. Guerrero and the then short-stacked Fan got their stacks in preflop, with the latter ahead and staying that way by making a flush. Lin went soon after. He got his stack in dominating Yan Zhuang but the latter spiked a three-outer on the turn to end his hopes.

Then there was a period of chip movement and big pairs getting busted. Bicknell fell from dizzying heights of first to the short stack, and a lot of that had to do with with her kings getting cracked Albert Paik’s big slick, the second day in a row they had such an encounter.

It took until the third level of the day until another elimination and yet again, more than one came in a short period of time. Jan-Eric Schwippert ran king-queen into Stephen Chidwick’s pocket aces, Yan Zhuang’s ace-deuce was dominated by Dapeng Mu’s ace-ten, and then Justin Bonomo semi-bluffed into the nuts of a then resurgent Bicknell. 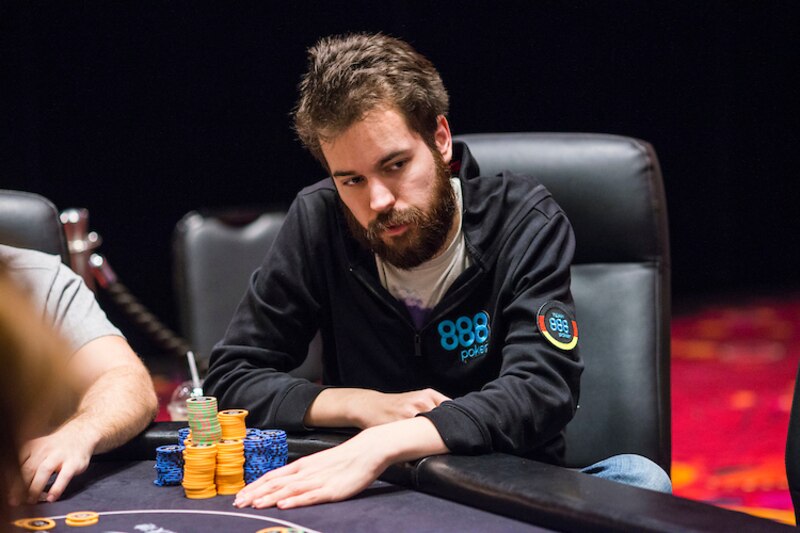 Adversaries Bicknell and Paik led the final nine onto the last table where Mu was the first player out, justing missing out on the official final table of eight. He fell to Chen who was starting to make moves of his own. Two more departed quickly after that: Dominik Nitsche (ace-three) departed to the other female player at the table Wenling Gao (ace-queen), before Chidwick won a race to take out another player in shape of Javier Gomez. 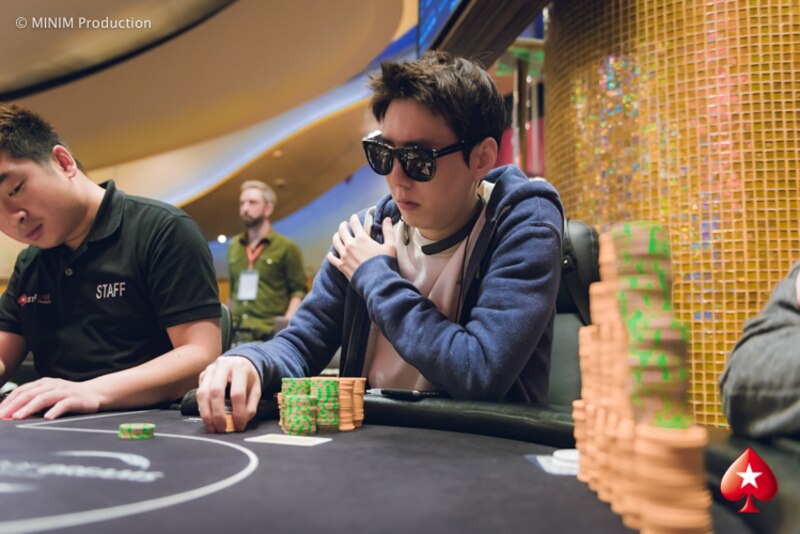 Paik was packed off in fifth

Then came the second period of big chip movements and huge coolers where almost every remaining player had the chip lead at one point. Gao had pocket kings cracked by the ace-five of Fan and then Paik busted to the pocket kings of Chen while holding aces – a king coming on the flop. Gao then picked up kings again, but once more, they were cracked by Fan, who held jack-ten that time. The chips went in on a ten high flop and another ten decimated her stack and she busted a couple of hands after. 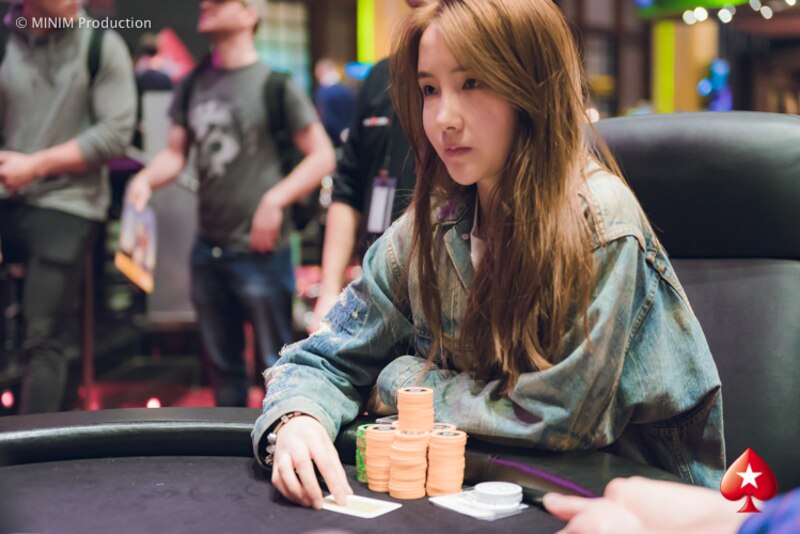 Bicknell: so close to making history

The remaining four players went off on a 60-minute dinner break and when they returned, it didn’t take long for it all to be over. Bicknell, trying to make more history, succumbed to eventual champion Chen when she shoved with king-queen but ran into the Taiwanese’s ace-queen. That put Chen into a big chip lead and soon after, he had one hand on the trophy when he took out agrubly the best player at the final table in Chidwick. The British pro has already won more that $2.6 million this year today and he added another HKD$1,868,000 to that total for third place when he lost a race to Chen. Chidwick: had to settle for third

From there, Chen had the heads-up match and tournament wrapped up in 20 minutes. This event will only get bigger as time goes on and poker in Asia continues to grow. Watch this space!