If the two games were fused together somehow, would you want to find out?

Everything pre-flop would be played like Hold’em. Then after the flop, more hole cards would make the rest of the hand like Omaha.

Suddenly, leaning on your Hold’em experience, you might start thinking it would be a good idea to win pots pre-flop. You know, before things got all Omaha-ey and complicated later on.

Or, if Omaha was your game, maybe waiting it out would be the better strategy?

None of which might count as the most urgent question you have about your poker game. You might even think this kind of thing wasn’t for you.

But if you are even a little bit curious, you might like a new game coming to PokerStars from tomorrow.

Fusion is a new game that blends together Hold’em and Omaha.

Fusion is the brand new game coming to PokerStars. Alternative names of “Holdaha” and “Omahem” were quickly dismissed.

You start with two hole cards, and a game that looks a lot like Hold’em. The betting doesn’t change, and the action continues in the same way.

But after the flop, if you’re still in the hand, you are dealt another hole card face-down.

Then a fourth hole card after the turn.

With four hole-cards you now make the best five card hand – using two cards from your hand and three from the board. Just like a normal Omaha game.

Of course, by now there’s nothing normal about it. If you’ve got this far in the hand there’s a good chance you have undergone a renaissance of critical poker thinking.

Every street adds a layer of super-charged theory. Every new hole card multiplies the possibilities.

Who knows, it might be so complex that bluffing becomes the only rational option left open to you.

Or, you might just push your knowledge of poker further than you thought possible (or thought necessary). 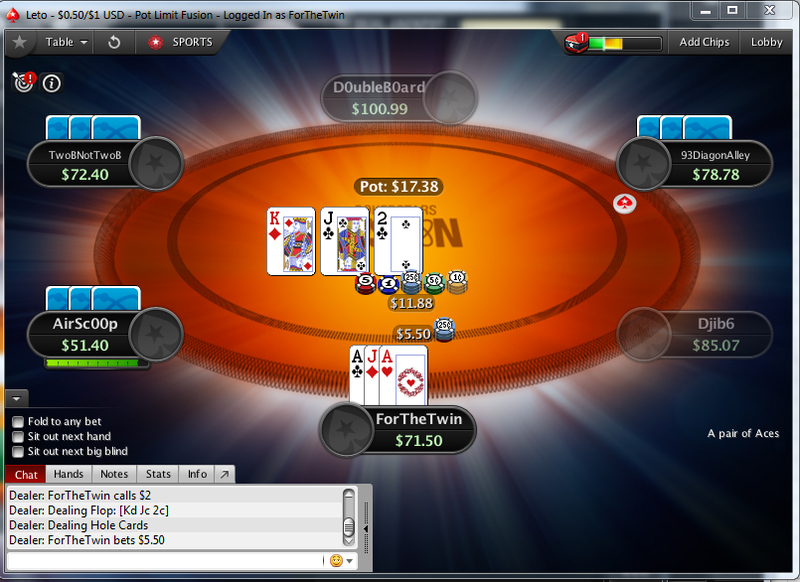 After the flop is dealt, players still in the hand receive a third hole card face down

A new way to look at the game

Played as a pot-limit cash game, Fusion is the latest creation of our innovation team.

Fusion is not permanent. It’s not designed to replace the games you regularly play.

But it offers experienced poker players like you a break from your regular games.

Or, just a curious new direction from which to play around with poker strategy.

We admit that from the side-lines it looks tough. But then just like with any other game, we expect someone will come along and crack it.

Would you make a good Fusion player?

If you’re curious, and want to give Fusion a try, you can find games in the PokerStars Lobby.

And while it takes knowledge of both Hold’em and Omaha, you don’t need to be an expert to play.

Either way you can try it, and find out, from tomorrow. 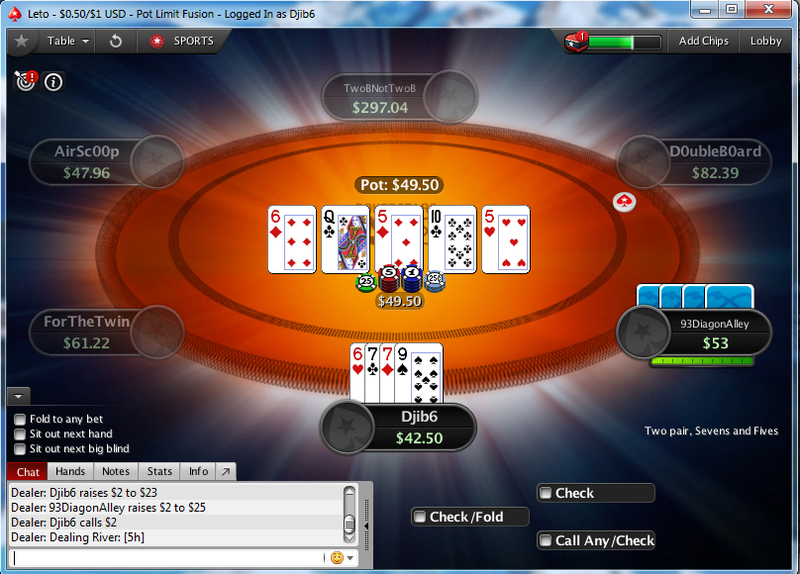 The end of a Fusion hand plays out like an Omaha hand, with each player still in the hand making the best five card hand using three community cards and two hole cards

“We want to give our players games that they have never played before and bring a unique offering to the table,” said Severin Rasset, Director of Poker Innovation and Operations.

“Fusion mixes two well-loved formats together giving an exciting twist to the game. We eagerly await player feedback and look forward to seeing everyone joining the tables, and giving Fusion a try.”

So, if you would like to find out whether being a good Hold’em player, or a good Omaha player, makes you a good Fusion one, head over to the PokerStars Lobby.

Give Fusion a try, and send your comments to us on Twitter: @PokerStars, or by email at: ideas@pokerstars.com.