It’s week 4 of the Human Lie Detector, which asks you the question:

Because as you’ll know if you’ve played each week up to now, it could earn you a Platinum Pass, and trip to the PokerStars Player’s Championship in the Bahamas next January.

If you’re coming to the Human Lie Detector new, you’ll want a reminder of what it’s all about.

Each week Daniel Negreanu (the Human Lie Detector) asks a fellow Team Pro three questions. One of those replies will be an outright lie. Daniel must work out which one.

Last week it was Fatima Moreira de Melo who was lying through her teeth. This week it’s Jeff Gross trying not to shift the needle. 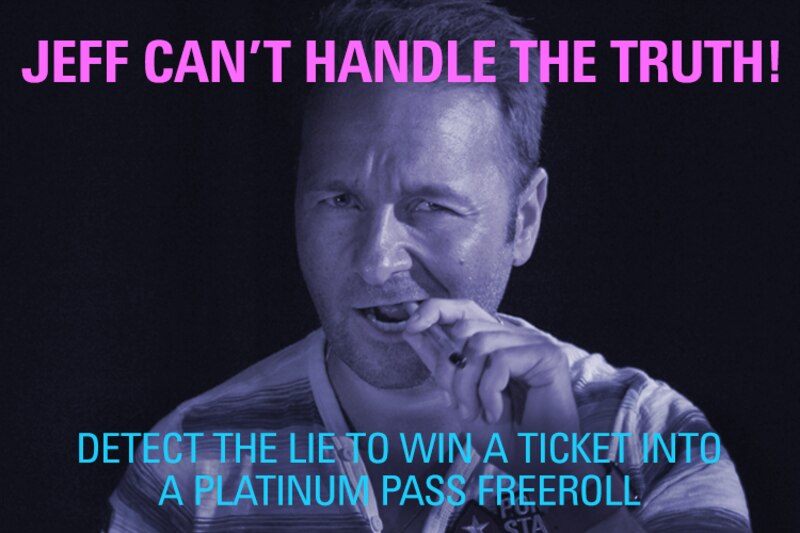 Jeff Gross faces the Human Lie Detector this week. Can you spot which of his answers is the lie?

But what’s in it for you?

Well, if you can also spot the bluff, you could win yourself that Platinum Pass.

And even if you don’t manage to win that, there are plenty of other prizes to win along the way.

Here’s how to take part

Your time bank is ticking…⏰ LAST CHANCE to play for a $30K #PlatinumPass! Watch Inspector @RealKidPoker grill @JeffGrossPoker and see if you can become a #HumanLieDetector. ️‍ Plus, 30 correct entries win an $11 ticket.
Info: https://t.co/uzoOA6BOvB pic.twitter.com/CB6uQCxtlP

Then, if you think you’ve spotted the bluff, tweet your answer (1, 2 or 3) with the hashtag #HumanLieDetector and [Stars ID].

That freeroll takes place on Sunday 11 November. The winner will earn a Platinum Pass.

So, start guessing. Watch this week’s video, make your pick, and find out the correct answer when we post the video on Friday.