Human Lie Detector: Can you spot a bluff? Turn your reading skills into a Platinum Pass

What if you could turn your reading skills into a Platinum Pass?

That’s the question we’re asking in a new promotion, that could earn you a Platinum Pass worth $30,000. 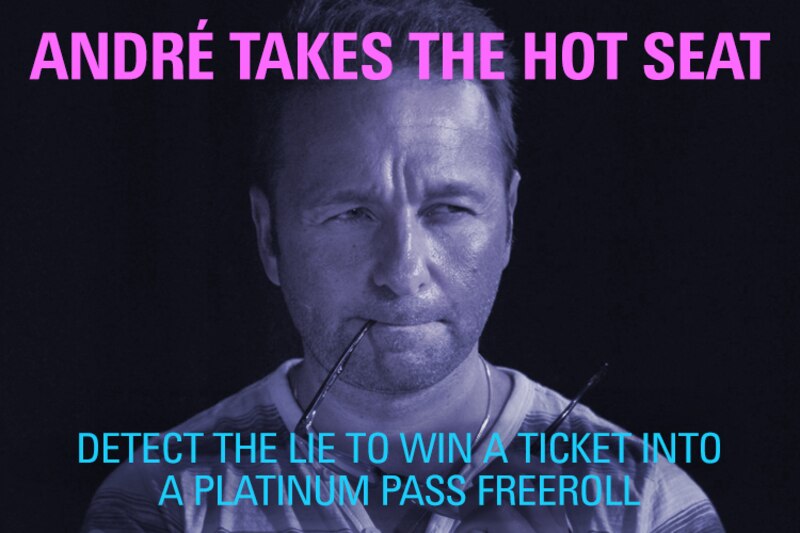 Daniel Negreanu asks three questions, but which answer is the lie? Get it right and you could win a Platinum Pass

He’s going to use his vast experience to spot the bluff, as told by a fellow Team Pro.

If you can also spot the bluff, you could win yourself a trip to the PokerStars Players Championship in the Bahamas next January.

But the game is simple, and a lot of fun.

Plus, if you don’t get all the way to the Bahamas, there are still plenty of other prizes you can win along the way.

Here’s how it works

The first video is released today (watch it in the Tweet below).

In it Andre Akkari will be asked three questions by Daniel Negreanu (aka The Human Lie Detector).

One of Andre’s answers will be a bluff. A lie. A giant porkie.

Your job (and Daniel’s) is to guess which one. Which is the bluff?

If you think you’ve spotted the bluff, tweet your answer (1, 2 or 3) with the hashtag #HumanLieDetector and [Stars ID].

That freeroll, which takes place on Sunday 11 November, will award a Platinum Pass to the winner.

But if you don’t win that there is still $3,000 worth of runner-up prizes to be won.

So, watch the video, make your pick, and find out the correct answer when we post the video on Friday.

@RealKidPoker is the #HumanLieDetector… are you one too? If you can spot @aakkari‘s bluff, you’ll win entry to a #PSPC #PlatinumPass freeroll. Plus, 30 correct answers win an $11 Bounty Builder Series ticket. Info: https://t.co/jtrlQa8Egj T&Cs: https://t.co/cAFvjzzqPT pic.twitter.com/UMp1gr2M8b

Otherwise, it’s over to you.