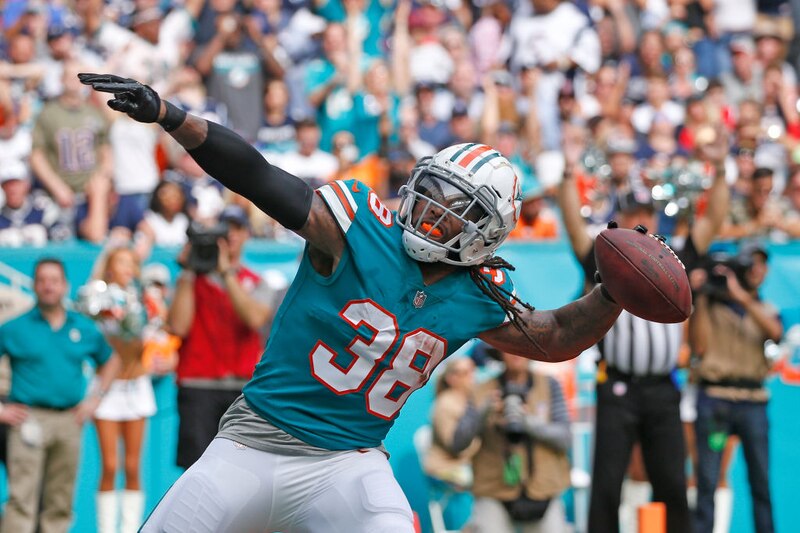 The Chiefs and Cowboys won in overtime. The Rams lost to Da Bears during a defensive slog in Chicago. The Texans saw their nine-game winning streak halted by Andrew Luck. The Saints rallied to a comeback win when their backup QB blocked a punt. And on Monday Night Football, the Seahawks beatdown the Vikings in a battle between stubborn Wild Card teams.

Miami Dolphins 34, New England Patriots 33…The Dolphins (7-6) are like a cockroach that won’t die no matter how many times you step on it. Bill Belichick does not play well in warm climates these days. The Pats are 0-2 in Florida this year. Overall, the Pats (9-4) are now 3-4 on the road and still undefeated in Masslandia. On the final play of the game, the Pats set up for a Hail Mary, but the Fish went for a last-gasp hook and ladder for a touchdown as time expired. Kenyan Drake did most of the dirty work with the winning touchdown, but also give credit to his teammates Kenny Stills and DeVante Parker for successful laterals under pressure.

Chicago Bears 15, LA Rams 6… The Rams (11-2) could not get any offense going against one of the best defensive teams in the NFL. Da Bears improved to 5-1 at home and it’s only going to get colder and windier in Chicago. Da Bears (9-4) kept Goff, Gurley, and company out of the end zone. They held Gurley to only 28 yards on 11 rushes. Goff threw the ball 44 times for four interceptions and only 20 completions. Mitch Trubisky played his first game back from a shoulder injury. The Rams gave him a tough time and Trubisky threw three picks. Luckily none of them cost him the game and Da Bears held on for a huge win against the best team in the NFC. The Rams lost only their second game of the season and both losses (Saints and Bears) occurred on the road.

MAHOMES IS FRENCH FOR “SCRAMBLE”

Kansas City Chiefs 27, Baltimore Ravens 24… The best defense in the league held Patrick Mahomes and the most-potent offense in the league to only 24 points in regulation. The Chiefs were in a rare bad spot and trailed by a touchdown in the 4Q, but Mahomes cobbled together a touchdown drive punctuated by a fourth and nine roll out bomb to Tyreek Hill. The Ravens (7-6) could not pull off an overtime upset and Lamar Jackson finally crapped out. The Chiefs (11-2) won this nail biter and clinched a playoff berth.

New Orleans Saints 28, Tampa Bay Bucs 14… After spotting the Bucs a 14-3 lead, the Saints (11-2) woke up from their Cowboys hangover and finally went to work. Taysom Hill, the Saints backup QB and utility player, blocked a punt in the 3Q. Down 14-3, Hill’s block fired up the Saints and sparked their comeback. The Bucs (5-8) suffered yet another defensive collapse in the 4Q. If the Bucs didn’t already fire the DC, they’d fire the DC after this anemic display of defense.

Indianapolis Colts 24, Houston Texans 21… Andrew Luck and the Colts (7-6) went into hostile territory and stopped the hottest team in the league. The Texans (9-4) were looking for their tenth consecutive win, but the Colts had other plans for their AFC South foe. After getting shut out last week against the Jags, Luck tossed two touchdowns in this big win. The Colts’ D kept constant pressure on DeShaun Watson and sacked him five times.

Dallas Cowboys 29, Philadelphia Eagles 23… The Cowboys (8-5) padded their first-place lead in the NFC East thanks to WR Amari Cooper’s three touchdowns, including the game-winning score in OT. Jon Gruden traded Cooper to the Cowboys midseason for a first-round draft pick, which seems like a steal right now for Jerry Jones. Seriously, was Jones wearing a ski mask during those negotiations? Because Gruden and the Raiders were robbed in broad daylight. Al Davis is rolling over in his grave right now. The playoff hopes for the Eagles (6-7) are slipping away like grains of sand in an hour glass.

LA Chargers 26, Cincinnati Bengals 21… The Bengals (5-8), playing without Andy Dalton, gave Phil Rivers and the Chargers more of a sweat then they’d like. Joe Mixon ran down their throats, but in the end, it wasn’t enough to beat the Bolts. The Chargers (10-3) held on for their tenth win of the season. Rivers and Keenan Allen hooked up for another touchdown, while backup RB Austin Ekeler rushed for 66 yards and a TD in place of Melvin Gordon (knee sprain).

GRUDEN STEALS SLIPPERY ONE AGAINST STEELTOWN

Oakland Raiders 24, Pittsburgh Steelers 21… You know that saying about the blind squirrel finding a nut every once in a while? The Raiders (3-10) were hella lucky because Steelers’ kicker Boswell slipped on a potential game-tying FG and failed to send the game into overtime. The Steelers (7-5-1) lost three in a row and played like donkey manure the last four weeks. With upcoming games against the Patriots and Saints, the Steelers had better snap out of their current funk, or they could let the Ravens backdoor the AFC North crown.

AARON GETS HIS GROOVE BACK

Green Bay Packers 34, Atlanta Falcons 20… The Falcons (4-9) put up 13 points in garbage time to try to mask the atrocities of this blowout. Aaron Rodgers won his first game with the Packers (5-7-1) since breaking up with former head coach Mike McCarthy. Rodgers tossed two touchdowns and Aaron Jones rushed for 78 yards and a TD. It’s like that 90s movie, Stella Gets Her Groove Back, except it takes place in Wisconsin.

Tennessee Titans 30, Jacksonville Jaguars 9… Derrick Henry destroyed the Jags (4-9) on TNF with 238 yards and 4 touchdowns. The former Heisman winner from Bama tied an NFL record with a 99-yard touchdown run. The Titans (7-6) keep their playoff hopes alive with a divisional win. The Jags are now 1-1 with a benched Bortles.

SAQUON SHOULD WEAR A CAPE

New York Giants 40, Washington Redskins 16… This score was 40-0 at one point and the Giants (5-8) played this game without ODB. The Skins (6-7) are full-blown jinxed. They lost four in a row after Alex Smith broke his leg. Last week, backup Colt McCoy broke his leg. This week, third stringer Mark Sanchez got the nod and he welcomed his first start in three years with a LOL-worthy pick six. Meanwhile, rookie of the year Saquon Barkley looked like the Flash during a 78-yard touchdown quick strike.

.@saquon put up nearly 200 YARDS by himself.

New York Jets 27, Buffalo Bills 23… The Jets (4-9) wanted revenge more than the #1 pick after an arse-kicking a few weeks earlier. Rookie QB Sam Darnold (USC) won the Rookie Bowl against the Bills’ top pick Josh Allen (Wyoming). Allen threw two interceptions in the loss, while Darnold rallied the Jets for his first-ever comeback victory for Gang Green. The LOLJets got the last laugh in this one.

Cleveland Browns 26, Carolina Panthers 20… The Browns (5-7-1) knocked off the Panthers (6-7), who continued to struggle on the road (1-6). Rookie QB Baker Mayfield (18-22, 238 yards, 1 TD, zero INTs) outplayed the stylish Cam Newton (zero TDs and 1 INT) in a close battle between two Heisman winners. The Panthers started the season 6-2 but they lost five straight games. In their last five losses, the Panthers were outscored 152-94. The gypsy queen doesn’t have to read Riverboat Ron’s tea leaves to know that his days are numbered in CLT.

San Francisco Niners 20, Denver Broncos 14… No one wants the #1 pick, eh? The Niners (3-10) surprised the lackadaisical Broncos (6-7). TE Greg Kittle ripped up the Broncos secondary for 214 yards and a touchdown. Kudos to SF’s run D for stonewalling rookie Phillip Lindsay (14 rushes and only 30 yards) for the first time in months.

THE COUGH-COUGH DEGEN GAME OF THE WEEK

Detroit Lions 17, Arizona Cardinals 3… This is the first time I’m looking at this score. Hope you bet the under.

Seattle Seahawks 21, Minnesota Vikings 7… Two NFC playoff teams threw down in Seattle in a hyper-physical, old-school battle in the trenches. The Vikes failed to convert a huge gamble on fourth and one and the Seahawks ultimately won on a clutch goal line stand.