Are you a Platinum Pass Adventure finalist?

It’s a big week for anyone who entered three of the Team Pro Platinum Pass Adventure contests in recent weeks.

First to announce will be Jeff Gross and Andrew Neeme.

They were looking for a #VloggerInParadise. Entrants would be judged on creativity, storytelling, humour, as well as an effort to get out of their comfort zone.

Jeff and Andrew were looking for what entrants were passionate about in life.

So here (in no particular order) are those five finalists:

Andrew and Jeff are each giving away 1% of their PSPC cash to the 5 finalists.

Jeff Gross on selecting the finalists:

This promotion has been really incredible!

Following the 81 contestants as they each completed the five-video challenge over five weeks, has been a treat to watch!

Seeing the competitors engage and support one another in the competition was refreshing and fun to be a part of.

Watching people’s first videos, and now their final entries, gave me goose bumps to see how they have stuck with it and made noticeable improvements along the way.

It brings back memories of making that initial leap into vlogging and I know how much frustration as well as fun it can be at the same time.

This project stands out to me as a top moment for me since starting my own YouTube channel.

A big thank you to everyone who competed and supported the contestants with watching, liking, and giving feedback on the videos, as well as to PokerStars for making this possible!

I am looking forward to meeting the winner and getting to hear about their experience along the way in the challenge!

With this once in a life time free roll I will be happy to help them with any questions they have.

Also, with bringing some experience with playing the 25K at the PCA for years I hope I can give them some advice on how the flow of the tournament goes and help to calm their nerves!

It will be fun to have them in a vlog of mine and take part in one if theirs if they choose to do so! I can’t wait to see how it unfolds & don’t be surprised if Andrew, Bill the contestant winner and I all end up at that Final Table of this massive prize pool! Andrew Neeme on the contest and the finalists

The grand prize is of course very alluring and exciting. But what really got me interested in doing this giveaway is that the people who jumped in would partake in this really introspective process.

They’d document a time in their lives and create something fun that they could always look back on.

And some people will continue the creation process, which we’re already seeing beyond the 5-video challenge on their channels.
There have been a lot of “thank you” messages from the participants for kick-starting their effort, so to see people embrace the process of it all is fantastic.

Seeing so many people giving it a go in locations all over the world is easily one of the top highlights for me since starting my own channel. I hope to stay in touch with as many of you new creators out there as I can.

I can’t wait to meet the winner in person. You know their excitement level is going to be through the roof. They’ll be on the freeroll of a lifetime and we get to watch it all unfold.

They’ll be in my videos, hopefully I’ll get to be in theirs, and the whole thing is just going to be a blast.

That’s not the only Platinum Pass Adventure wrapping up this week.

Jen Shahade’s contest was reduced to five finalists this weekend.

If you remember, entrants were asked to create a game that combined her two loves of chess and poker (or chance).

The entries flooded in and now they’re down to five.

As Jen herself said:

I am so thrilled to announce the My Chess Poker Game finalists. I was blown away by the submissions, and I learned so much about game design and creativity from the entrants.

This is one of my favourite projects ever.

It was difficult to narrow down to five, so we chose six finalists. I can’t wait to see who will win the Platinum Pass, and to play the winning game in the Bahamas! 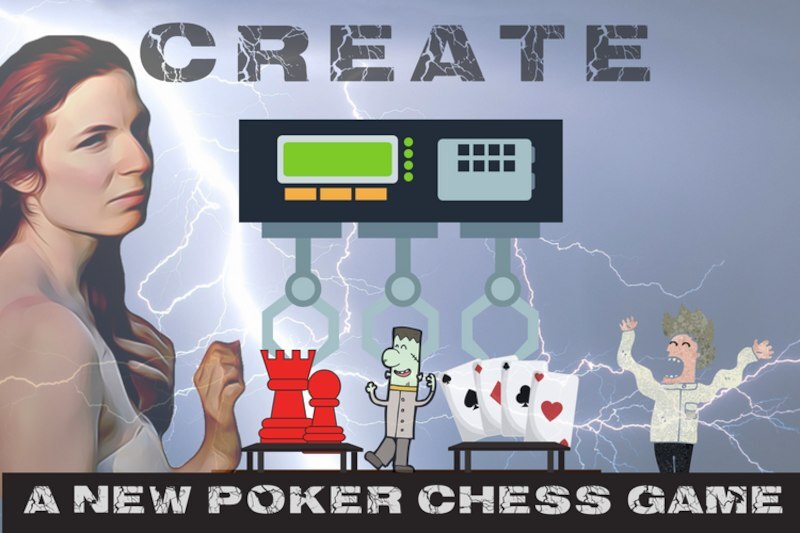 1. Five Card Chess by Jennifer Vallens: When people hear about a chess and chance challenge, they often think of some mechanism to use cards, dice or a spinning wheel to determine which piece/s a player can move. Such games can be clunky because the movement is often too restrictive. I love how Jen Vallens designed her game to deal with these challenges by allowing captures and king moves “for free” and an option for a full redraw. This game still has a lot of skill in it, but a tricky novice can beat a strong master with enough luck AND cunning. There are also deeper strategy levels like card counting.

2. #MyChessPokerGame by Cristophe Stammet: I loved the elegance of this game’s design: a simplified chess board, where you bid on ways to push your pawns to the endzone. It was clear the creator thought about this challenge deeply and did a lot of testing to make it playable. Stammet’s game shows poker players some of the basic geometric and tactical themes in chess, and chess players concepts of Nash equilibrium. I can imagine it being used as an educational tool in a college class on games.

3. Challenge Chess by Matt Matros: I love how three-time WSOP Champ Matt Matros chose an element of hidden information that didn’t require any props: you pick two pieces at the start of the game that are “Power Pieces” and have special abilities.

He also did a good job of introducing an element of bluffing into his game, and showed some beautiful examples of how his game could change the chess endgame.

4. Blunder Chess by Alexandra Botez: Chess streamer Alexandra Botez’s hilarious video shows how even just one rule change can totally effect all of our chess strategies: you have to blunder once a game, and your opponent gets to pick that blunder! This game also takes the pressure off of the often intellectual weight of a chess game and brings in fun elements of chance and levity.

5. PokerHouse by Alisa Melekhina: FIDE Master and chess author Alisa Melekhina’s game is so wild I wanted to try it as soon as I watched the video: every ten moves, chess pauses to play a poker hand, and your chess pieces turn into chips. When I tried it, I saw how playable and fun this “CrazyHouse” inspired game is.

6. Chess Draw by Warren Stevens: I loved poker pro Warren’s basic concept- with every capture, you draw cards that can be used to win the game if you compile a straight or better. Anyone can beat anyone in this game! But there are still skill elements: a stronger player can win the game by checkmate, and is more likely to force more captures to win the game.

There’s one more to come, and that’s news of Daniel Negreanu’s finalists.

News of that will be available in the next 24 hours.

So, stay tuned for that.

For now, congratulations to all the finalists.