Typically in major poker tournaments, there’s nothing but scorn reserved for the first player to take his or her seat. If you’re showing up so early that you’re sitting down before the scheduled start time, you’re green, you’re a noob. You’re not going to win.

Here’s some news: It’s time to scrap all that nonsense. Time to mark it down as the way it used to be. Not only is Sam Greenwood very commonly the first player to arrive to Super High Roller tournaments, he does it proudly, often even berating the other stragglers whose tardy arrival times sometimes means the start is delayed.

And now, at 1am, after Saturday night gave way to Sunday morning, Greenwood is the €100,000 Super High Roller champion at the European Poker Tour (EPT) Monte Carlo Main Event. Greenwood played every single minute of this tournament. The first man sitting was the last man standing, and he has €1.52 million to show for it. 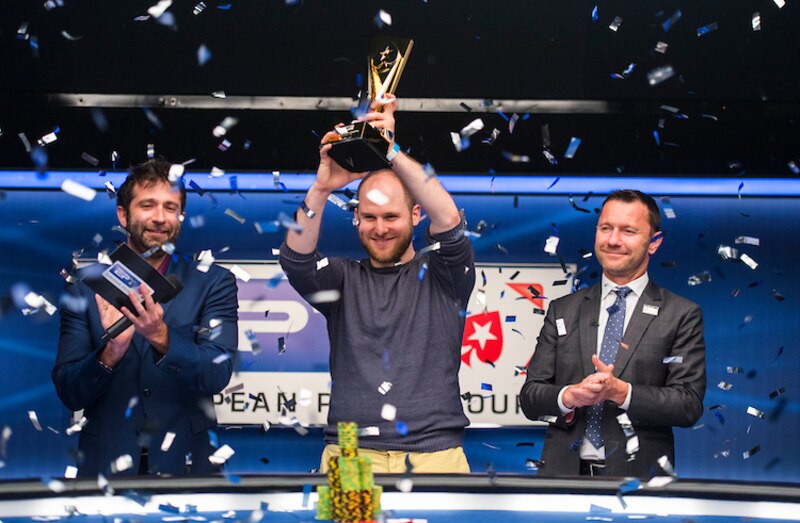 Sam Greenwood: Collects the trophy and the plaudits

That is Greenwood’s largest single career score, and pushes his lifetime tournament earnings past $10 million. Remarkably it’s the 29-year-old from Toronto’s first major title under the PokerStars branding, but it’s actually his third outright victory this month.

“When you win, all the mistakes you made along the way don’t really matter,” Greenwood said in his winner’s interview. Reader: he hadn’t made any.

He clinched this title after picking his way through a 30-strong field of the world’s best, and a tricky final table featuring two former champions. He then proved to be the only man in the field who could outmanoeuvre Christoph Vogelsang. Vogelsang, defeated after a long heads-up battle, takes €1.046 million, and might easily have been the champion. He was one card away from the title in one particular coup, but Greenwood won the crucial final pot. They were super-deep at the start of play, with around 350 blinds spread through the remaining six players. Most of them were with Vogelsang, and he only got richer in the early stages when he picked off a big semi-bluff from Isaac Haxton that trimmed the field to five.

Vogelsang had pocket jacks, which was an over-pair to Haxton’s combo-draw on the turn. Haxton got his chips in but missed, and he went searching for his €313,000 payday–a net profit of €13,000 after he bought in three times. Ike Haxton out in sixth

Given how many blinds everyone still had, Haxton’s elimination was something of a shock. But the next four hours were a degree more predictable, with the famous five keeping the pots small. Vogelsang seemed to have a stranglehold on the chip lead right up until he didn’t: his countryman Ole Schemion won a series of pots, including a decisive queens vs. aces skirmish.

The pot put Schemion out front, but arguably Vogelsang will be the happier with how the hand played out. He lost the absolute minimum and somehow managed to fold his queens to Schemion’s turn shove, even though it was an overpair to the board. Hands like that are what characterise these Super High Roller events: two players playing perfectly, including making spectacular lay-downs.

Schemion couldn’t cling on to the lead he had so recently amassed, however, especially as the blinds finally caught up with the stacks. Following 240 minutes of minimal significant action, there was suddenly a rush of it: Greenwood doubled; Schemion and Vogelsang clashed again; and Justin Bonomo went broke. (Read through the live updates for all the nitty gritty.) The hand that cost Bonomo was an absolute cooler. He flopped two pair with his 3♠2♠ after completing from the small blind. Ali Reza Fatehi, who checked his option in the big blind, flopped a bigger two pair. There was no getting away for Bonomo and he took €401,000 for fifth. A cooler for Justin Bonomo

Don’t weep for Bonomo. His 2018 heater has already grossed him more than €7 million, and we’re not even into May.

Action now came at a furious pace and all of the remaining four players — Vogelsang, Fatehi, Schemion and Greenwood — all took over, and lost, the chip lead. The first of them to nosedive irreparably, however, turned out to be Schemion, whose roller coaster was steeper than the others’. After watching the best in the world play exemplary deep-stack poker for the best part of three days, we were then treated to a masterclass in how to play with a short stack. It’s deliberate too that I’m including Fatehi in that assessment. He may be a recreational player and a businessman, but he had played sublimely throughout the past couple of years, and this podium finish has been in the mail.

By that point stacks were so short that one false step could prove to be the end, but there was no getting away from that kind of cooler at any stage. Fatehi was left with crumbs after that, and lasted two more hands. Ali Reza Fatehi: Time to get his coat

That was a sad end, with €669,920 worth of consolation, to a tournament in which he had been the dominant force. Fatehi was the early chip leader on Day 1, before losing with kings to Vogelsang’s aces. He then rallied back from that to take over the lead on Day 2 too and push to the final. We have not seen the last of Ali Reza Fatehi (and if you want to see more right away, watch him on the PokerStars Cash Challenge. He was sensational there too.)

Greenwood took the bigger stack into heads up play. His 7.61 million was nearly double Vogelsang’s 3.89 million. But any major pot could either end it or turn things on their head and when Vogelsang flopped a set with pocket twos, ending with a full house, he extracted the maximum value and took control once again. But then things swung back to Greenwood, when Vogelsang couldn’t beat pocket aces with another pair of twos. What could have been over in a couple of hands, pushed past a couple of hours, and then a couple more. 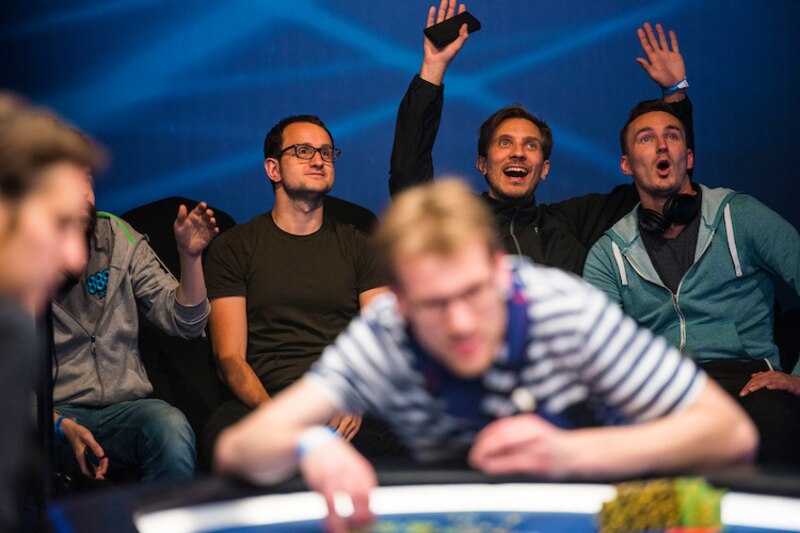 This was a swingy heads-up duel. Again, relive it on the live updates page. Vogelsang got incredibly close to the victory when his A♦6♥ led Greenwood’s K♥7♠ all the way through flop and turn. But then the K♣ hit the river and Greenwood was back. The final hand occurred at a little after 12:30am, when Vogelsang again couldn’t win with a low ace. His A♥5♥ lost to Greenwood’s K♠J♣ when the J♠ flopped and then the J♦ fell on the river.

They were deep into Level 25 at that point, and Greenwood had been there for all of them. Maybe it doesn’t really matter that you win the first pot of the tournament, despite what Greenwood says. But winning the last one sure feels good.

“When you get heads-up, you have a final challenge, a last battle,” Greenwood said. “When the cards don’t go your way it can get very frustrating and it’s stressful…[But I have] no regrets, no nothing. I can sleep easy tonight.”