Wooly, wicked, and weird Week 13 featured a plethora of unexpected outcomes. Six dogs won outright including four home dogs. Just when you think you figured out the NFL, you get one of those existential weekends when the family dog bites you on the bottom and it makes you re-question everything in the universe. 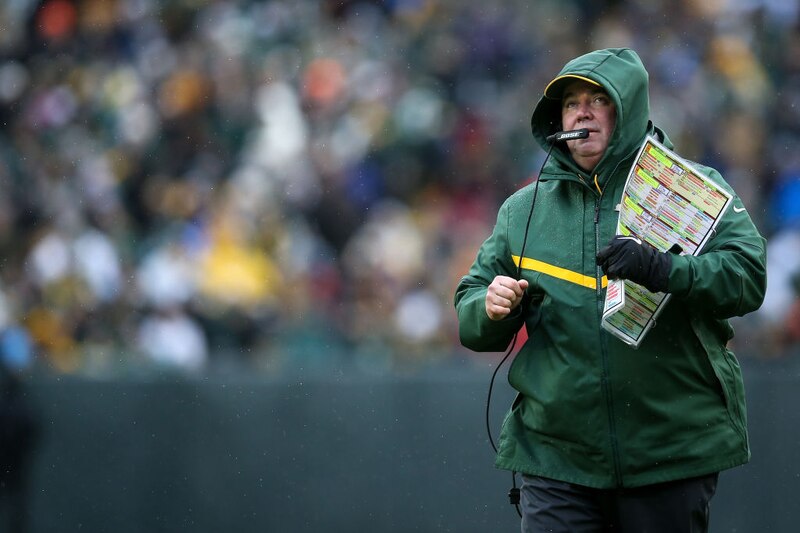 It’s lonely out there

We should had known it was going to be a peculiar week when the Cowboys beat the Saints on Thursday Night Football. Things got wilder and freakier with each game. The Bortleless Jags shutout Andrew Luck and the hottest offense in the league. The sad-sack Raiders gave the Chiefs a run for their money. The gloomy Packers lost an easy game against a terrible team and head coach Mike McCarthy promptly got fired. The Curse of Monday Night Football continued for the Washington Redskins. Not only did the Skins lose, they also lost backup QB Colt McCoy with a fractured leg, which forced Mark ‘Buttfumble’ Sanchez into action.

Dallas Cowboys 13, New Orleans Saints 10… Guess the Cowboys (7-5) are good after all? Their D hunkered down and held Drew Brees and the Saints (10-2) to only 10 points. A month ago, we were all talking about the Cowboys need to find a new head coach, but now the Cowboys are in first place and they just beat one of the front runners for the Super Bowl.

LA Chargers 33, Pittsburgh Steelers 30… Phil Rivers, the most-devout Catholic in the NFL with eight children and a ninth on the way, led the Chargers (9-3) to a big win in the Game of the Week. Crazy ending too against the Steelers (7-4-1) in Pittsburgh on SNF. Without stud RB Melvin Gordon, rookie Justin Jackson from Northwestern stepped up in the second half with 63 yards and a touchdown. Rivers went 26 for 36 for 299 yards and 2 touchdowns. The Chargers exploited a mismatch against WR Keenan Allen, and Rivers found Allen 14 times for 148 yards and a score. The Steelers have not looked good their last three weeks. Big Ben and company better correct the ship before Christmas.

3rd times the charm. #Steelers go offsides on 3 straight attempts (one miss, one block and one declined)That was crazy. pic.twitter.com/xhoRs29tfB

Kansas City Chiefs 40, Oakland Raiders 33… Chucky and the Raiders (2-10) put up a decent fight in the second half to make it a good sweat. Mahomes threw four more touchdowns. Yawn. TE Travis Kelce had a career day with 12 catches for 168 yards and two scores. Spencer Ware rushed for 27 yards on 14 attempts while replacing of Kareem Hunt, who got cut 40 hours before game time (after TMZ released the incriminating tape of Hunt punching and kicking a woman in a Cleveland hotel). The Chiefs are now 10-2 and the first team in the AFC to reach double-digit wins.

LA Rams 30, Detroit Lions 16… The Rams (11-1) got off to a slow start, but finished off the Lions (4-8). Matt Stafford only got sacked four times, so he’ll only need one Vicodin after the game instead of two. On the other side, QB Jared Goff had a rough day with two turnovers. Todd Gurley (132 yards, 2 TD) tried to screw over fantasy football nerds with some more “I Don’t Care About Your Fantasy Team, So I’m Gonna Get Tackled Instead of Scoring ” antics. It was funny the first time. But he still got the score couple plays later, so the nerds got the last laugh. Derp.

For the second time this season: Todd Gurley doesn’t care about your fantasy team pic.twitter.com/wKbyEsJ3rd

Arizona Cardinals 20, Green Bay Packers 17… Mason Crosby missed a potential game-tying FG to send the game in overtime and give Aaron Rodgers a chance for heroics in OT. However, it would have only postponed the inevitable. The Cards (3-9) held on to beat the listless Packers (4-7-1). The ugly home loss against a 2-win team gave the town of Green Bay the perfect opportunity to fire head coach Mike McCarthy. Everyone knew a divorce was inevitable between McCarthy and Rodgers, but as bad as it got, the Packers were ruthless in firing McCarthy midseason. The guy who them a Super Bowl not too long ago. They should have let him finish out the season out of respect. Ruthless.

Tarik Cohen with the touchdown THROW!

New England Patriots 24, Minnesota Vikings 10… One of the few games that followed the scenario we all imagined. The Pats improved to a perfect 6-0 at home and the Vikings (6-5-1) are still haunted by kicking woes. Despite a highly-efficient game from Dalvin Cook, the rest of the Vikings could barely muster up 10 points in Foxboro. Kirk Cousins (1 TD, 2 INTs) particularly struggled. Gronk was silent for the Pats, but WR Josh Gordon scored a touchdown. Someone I never heard of before, James Develin from Brown, scored two rushing touchdowns for the Pats. Develin now has three scores in the last three games.

Baltimore Ravens 26, Atlanta Falcons 16… Nothing can stop rookie QB Lamar Jackson except a kick to the head by his own teammate. Even with the minor whiplash, Jackson guided the Ravens (7-5) to a third straight win with LJ as a starter. The Falcons (4-8) looked as helpless as they have all season. Whenever the owner tells the press that he has full confidence in the head coach, it’s a kiss of death. Dan O’Brien from the Falcons is a marked man.

Denver Broncos 24, Cincinnati Bengals 10… The Bengals (5-7) had no shot without Andy Dalton, but the Broncos (6-6) are now riding high on a three-game winning streak. Undrafted rookie RB Philip Lindsay (ex-Colorado Buffs star from up the road in Boulder) posted a career day with 157 yards and two touchdowns. If it weren’t for Saquon Barkley, Lindsay would win Rookie of the Year. Lindsay snapped off a 65-yard touchdown to pad his highlight reel.

Houston Texans 29, Cleveland Browns 13… The Texans (9-3) are the hottest team in the NFL right now with 9 wins in a row. Baker Mayfield and the Browns (4-7-1) finally got to see what it was like playing against a legit D. The Texans took Mayfield behind the shed and held the Browns to only 13 points.

Tampa Bucs 27, Carolina Panthers 17… The Panthers (6-6) have become fade material on the road. They are now 1-5 away from CLT. The Panthers were bought by a hedge fund billionaire in the offseason and Mr. Wall Street apparently put Ron Rivera and the rest of the coaching staff on notice. Riverboat Ron better start returning sizzling dividends otherwise his entire portfolio is gonna get liquidated. Then again, when Cam Newton throws four interceptions and gets sacked four times, you’re not going to win a lot of games. In the Bucs latest game of QB Roulette, Jameis Winston looked steady with 2 touchdowns and zero picks. Winston led the Bucs (5-7) to their second win in a row.

Seattle Seahawks 43, San Francisco Niners 16… Russell Wilson destroyed the Niners secondary and you got the feeling that the Seahawks really wanted to stick to former Legion of Boomer Richard Sherman. Wilson unleashed four touchdowns (on only 11 of 17 passing) in the blowout. The two Bay Area teams, the Niners (2-10) and Raiders (2-10), are now vying for the worst record in the league.

Russell Wilson and Tyler Lockett connect for the score!

Miami Dolphins 21, Buffalo Bills 17… The Bills (4-8) had a shot to win this late, but rookie QB Josh Allen could not get it done. The Fish improved to 5-1 at home and 6-6 overall. They got lucky too with a not-so optimal offense that generated only 175 total yards. The Wait, What? Stat of the Day: Josh Allen with 135 rushing yards.

Jacksonville Jaguars 6, Indianapolis Colts 0… The Jags are now 1-0 this season when Blake Bortles does not start. The Jags (4-8) responded to the shakeup and they pitched a shutout against one of the hottest offenses in the NFL. Luck ended his 8-game streak of throwing three or more touchdowns. Jalen Ramsey and company kept Luck out of the endzone completely. The Colts (6-6) are now on a much harder path to the playoffs.

Tennessee Titans 26, New York Jets 22… Leave it up to the LOLJets (3-9) to blow a 16-point lead. Marcus Mariota rallied the Titans (6-6) for the win despite throwing a pick six to start the game.

GOTTA GET UNSTUCK GAME OF THE WEEK: EASY MONEY

Philadelphia Eagles 28, Washington Redskins 13… It wasn’t pretty, but the Eagles gutted out a must-win on Monday Night Football. Carson Wentz finally hooked up with Golden Tate for a touchdown. Another bad beat for the Skins. Only two weeks after they lost starting QB Alex Smith to a fractured leg, backup QB Colt McCoy fractured his leg in the 2Q. His backup, Mark Sanchez, finished the game for the Skins. Adrian Peterson scored a 90-yard touchdown, but got held under 100 rushing yards by the Eagles. The Curse of MNF continues for the Skins, who are now 1-9 in their last ten Monday games and 5-23 over the last 20 years on MNF.