The Texans won eight straight games including the first game back since founder/owner Bob McNair passed away on Friday. The Chargers blew out the Cards during a near-perfect night for Phil Rivers. The Jags officially imploded after an ugly loss to the Bills. The Broncos picked off the Steelers during a visit to the Mile High City. The Bears, Cowboys, and Saints were all favorites on Turkey Day and they all won. 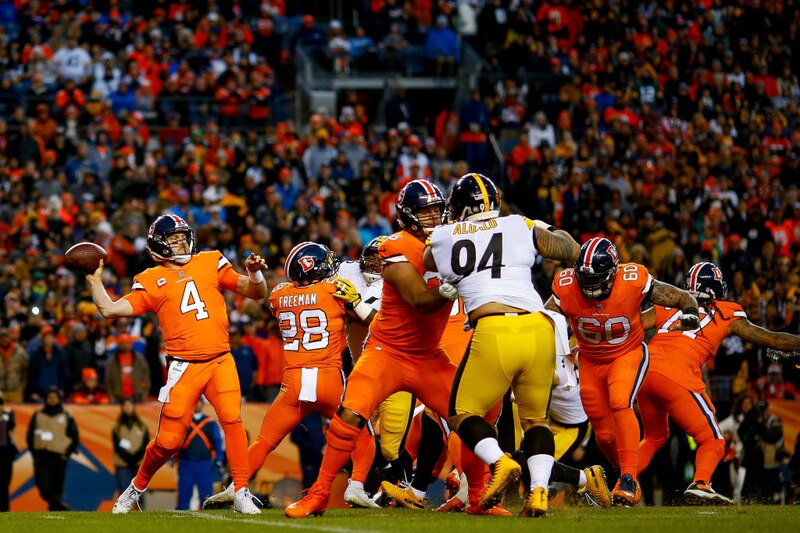 Week 12 looked weak on paper, but ended up as one of the more compelling weeks of the season. The Seahawks, Vikings, Colts, and Ravens won key games to keep their Wild Card hopes alive.

New Orleans Saints 31, Atlanta Falcons 17… The Falcons (4-7) had no shot in NOLA on Turkey Day night. Matty Ice threw for 377 yards and 2 touchdowns, but couldn’t top Drew Brees’ efficient 171 yards and 4 touchdowns to four different receivers. Matty Ice was the leading rusher for the Falcons with 16 yards in a pathetic ground effort. Kamara/Ingram combined for 141 rushing yards, but neither fantasy stud found the endzone. The unstoppable Saints improved to 10-1.

LA Chargers 45, Arizona Cardinals 10… The Chargers (8-3) are back on path after the Cardinals (2-9) got an old-fashioned rump-kicking. Phil Rivers had a near-flawless game. He broke the record for most completions to start a game at 22 and then set the record with 25. He finished the night with 28 out of 29 completions for 259 yards and 3 touchdowns. The only bad news is that the Chargers lost RB stud Melvin Gordon to an MCL injury.

Philip Rivers is unstoppable.
And @Keenan13Allen is catching TDs!

FIVE IN A ROW FOR LUCKY PONIES

Indianapolis Colts 27, Miami Dolphins 24… Andrew Luck worked some 4Q magic to put the Colts (6-5) in position to win this one against the Dolphins (5-6), who were in the lead for the majority of the game. Luck threw three touchdowns in eight straight games, which tied him with Peyton Manning for second most consecutive games with three scores. Adam Vinatieri kicked the game winner. Yet another winning kick for the GOAT.

Denver Broncos 24, Pittsburgh Steelers 17… The Broncos (5-6) stopped the Steelers’ (7-3-1) six-game winning streak. Case Keenum threw 2 touchdowns and Philip Lindsay rushed for 110 yards and a score. The Broncos had one of the worst run Ds in the first half of the season. They have since plugged the necessary holes and managed to limit James Conner to only 53 yards and zero touchdowns. The Broncos D also picked off Big Ben twice and sacked him twice. At least the Steelers pulled off a cool trick play and their kicker tossed a touchdown.

(Yes, you read that correctly.) pic.twitter.com/0FtvWfCkCO

Chicago Bears 23, Detroit Lions 16… Even with a backup QB, Da Bears (8-3) won the early morning Turkey Day match against the distraught Lions (4-7). The Bears D picked off Matt Stafford twice, who got outplayed by backup Chase Daniel. The journeyman QB had the game of his life and threw two touchdowns on Thanksgiving for the win.

Seattle Seahawks 30, Carolina Panthers 27… Russell Wilson (339 yards, 2 TD) completed a couple of big-time passes to lead the Seahawks (6-5) to a stunning comeback win. The Panthers (6-5) were truly stunned at home, where they were 5-0 this season. Christian McCaffrey posted 100+ yard games on the ground and in the air and scored a touchdown, but it wasn’t good enough to beat the Seahawks.

339 passing yards and 2 TDs.@DangeRussWilson led the #Seahawks to a big road win in Week 12! #SEAvsCAR pic.twitter.com/7TDkXEm6dK

Minnesota Vikings 24, Green Bay Packers 17… The Vikes (6-4-1) bounced back after a devastating loss to the Bears. Kirk Cousins threw 3 TD and the Vikes D stepped up in the second half for a key division win against the Packers (4-6-1), who can’t buy a win on the road (0-6). Then again, the Vikes owned the Packers the last couple of years with a 5-1-1 record. The breakup between Aaron Rodgers and head coach Mike McCarthy is impending. If you’re a Cheesehead that’s not in denial, it’s time to find your favorite Emo playlist on Spotify and hit play.

COOPER TIME DEEP IN THE HEART OF TEXAS

Dallas Cowboys 31, Washington Redskins 23… The Cowboys (6-5) see an NFC East title within grasp and didn’t waste a chance to put away the Alex Smith-less Skins (6-5). Amari Cooper scored two touchdowns on Turkey Day including a 90-yard score and looked like he was worth a first-round draft pick. The Cowboys moved into a first-place tie with the Skins, while the Eagles are only one game back.

Baltimore Ravens 34, Oakland Raiders 17… Lamar Jackson is not a fluke and all of a sudden, the Ravens have life in them. With Jackson at the helm, the Ravens (6-5) won two in a row with a legit shot at the playoffs. Jackson had so-so passing numbers with 178 yards and a touchdown, but he also threw two interceptions. On the ground, Jackson looked unstoppable with 71 rushing yards and a touchdown on 11 attempts. The Raiders (2-9) showed up for about five minutes before they packed it in.

New England Patriots 27, New York Jets 13… The Jets jumped out to a 7-0 lead and it was all downhill after that for the LOLJets (3-8). The Pats (8-3) gutted out a not-so-pretty win in the Meadowlands. Gronk finally woke up from a long slumber and found the endzone. Tom Brady won the Battle of the Old Man QBs. Josh McCown lost his last chance to beat Tommy Terrific.

Buffalo Bills 24, Jacksonville Jaguars 21… A game so ugly that Leonard Fournette got tossed for fighting. A game so ugly that it got the offensive coordinator fired and Blake Bortles (2 INTs, 3 sacks) benched. Finally. Too little, too late. The Jags (3-8-1) lost this game against the Bills (4-7) before they even stepped on the field in Buffalo.

Philadelphia Eagles 25, New York Giants 22… The Giants (3-8) blew a 12-0 lead and the Eagles (5-6) won by a FG late in the 4Q. Carson Wentz engineered a 4Q comeback to keep the Eagles playoff hopes still alive. In a losing cause, rookie RB Saquon Barkley rushed for 101 yards and a touchdown, plus he caught another. The Giants two-game winning streak has come to an end along with their season. Cue the ominous Godfather theme for Eli Manning.

Cleveland Browns 35, Cincinnati Bengals 20… Just when you thought the Bengals (5-6) were going to put together a late-run for the playoffs, they were whooped at home by a division foe. Baker Mayfield tossed four touchdowns for the Browns (4-6-1), who’ve been on a tear since they fired their head coach. The Marvin Lewis Dunzo watch begins.

SHRUG EMOJI GAME OF THE WEEK

Tampa Bay Bucs 27, San Francisco Niners 9… Did anyone watch this snoozer of a game? The Bucs (4-7) caught a much-need slumpbuster against the lowly Niners (2-9).

GOTTA GET STUCK GAME OF THE WEEK

Houston Texans 34, Tennessee Titans 17… Eight in a row for the Texans (8-3), who won a division game against the Titans (5-6) and remain on top of the AFC South. Lamar Miller snapped off a 97-yard touchdown. Emotional win too on Monday Night Football and dedicated to Texans founder/owner Bob McNair, who passed away on Friday.