Seven weeks into the NFL season and the Los Angeles Rams are still undefeated at 7-0. Patrick Mahomes and the Kansas City Chiefs had another sick week with four more touchdown passes in a rout over the Bengals. Drew Brees joined the 500 TD Club and the Saints improved to 5-1 thanks to a Justin Tucker shanked kick. The Jags finally benched QB Blake Bortles. And the Pats squeaked by Bears in shootout at Soldier Field. 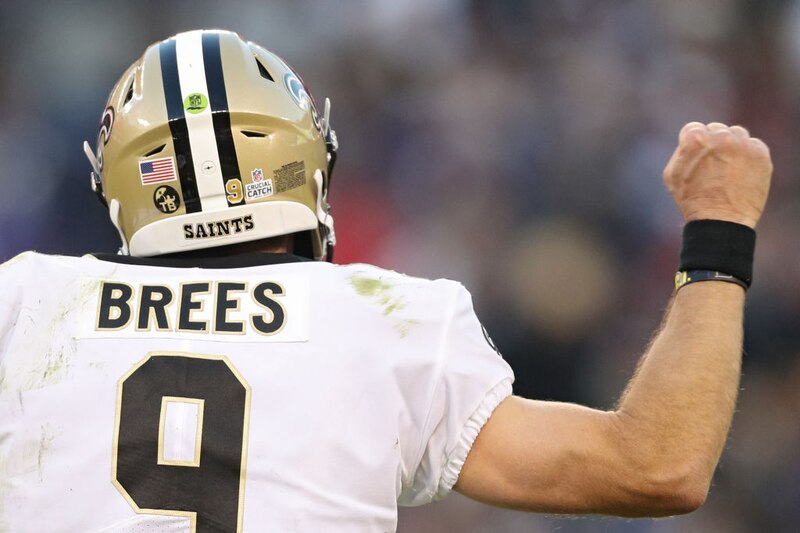 New England Patriots 38, Chicago Bears 31… In the Best Game of the Week, Tom Brady and the Pats (5-2) held off another up-and-coming sophomore QB. This time Mitch Trubisky (2 TD and 2 INT) tried to dethrone the GOAT, but fell short. Brady threw 3 TDs in the win. Cordarrelle Patterson’s 95-yard TD return was the game-changer for the Pats, who were down 17-7 at the time. On the final play of the game, the Pats thwarted Trubisky’s Hail Mary that was caught but came up short on the one-yard line. Trubisky had one heck of a touchdown scramble. He ran over 72 yards for a 9-yard touchdown. Trust me, the math checks out.

He backed up all the way to the 30, but Trubisky still found his way to the end zone for SIX!

New Orleans Saints 24, Baltimore 23… The Ravens’ Justin Tucker, one of the best kickers in the NFL, never missed an extra point… until Sunday. Tucker connected on 222 XPs in a row without a miss until he missed a routine XP late in the 4Q with 24 seconds remaining. The Ravens (4-3) were trying to tie and force an overtime. The Saints locked up the road win to improve to 5-1. Drew Brees joined the 500 TD Club with a pass to Benjamin Watson in the 2Q. Only three other QBs threw 500 touchdowns: Brett Favre, Peyton Manning, and Tom Brady.

THE KING STAY THE KING

L.A. Rams 39, San Francisco Niners 10… The Rams won an easy game to improve to 7-0. Todd Gurley rushed for 3 touchdowns and Jared Goff tossed two more. The Niners (1-6) took a bad beat with Jimmy G’s knee injury, but they are light years behind the Rams.

Kansas City Chiefs 45, Cincinnati Bengals 10… This SNF match up was billed to be a shootout, but KC’s defense showed up for the first time this season. KC limited Andy Dalton and the Bengals to 10 points. Patrick Mahomes bounced back from his first loss of the season with another magnanimous performance with 4 TD and 358 passing yards. Kareem Hunt added three TDs. The Chiefs (6-1) easily covered but the under hit. The Bengals (4-3) did not opt for a garbage-time score to help out a miraculous backdoor cover for over bettors.

RUNNING OF THE LIONS

Detroit Lions 32, Miami Dolphins 21… Backup QB Brock Osweiler could not relive last week’s magic for the Dolphins. The Lions (3-3) secured a win after their bye week and Matt Patricia discovered a running game. Kerryon Johnson rushed for 158 yards and LeGarrette Blount added 50 and a TD.

Carolina Panthers 21, Philadelphia Eagles 17… Cam Newton led the Panthers (4-2) to a stunning comeback in the 4Q. Cam rallied the Panthers down 17-0 to edge out the Eagles (3-4), who let a sure-fire win at home slip away.

L.A. Chargers 20, Tennessee Titans 19… Melvin Gordon was a last-minute scratch and the Chargers (5-2) barely beat the Titans (3-4). Rookie head coach Mike Vrabel gambled and lost. After scoring a TD and down 1, he opted for a 2-point conversion and went for the win instead of kicking the XP for the tie and forcing OT. The gamble lost due to poor play calling, and the Titans failed to convert. Phil Rivers dazzled U.K. fans on the first play from scrimmage when he connected on a 75-yard TD strike to Tyrell Williams.

On the @Chargers' first play…@TyrellWilliams_ goes 75 YARDS for the TD! #FightForEachOther

Minnesota Vikings 37, New York Jets 17… The Vikes (4-2-1) locked up an easy road win. Kirk Cousins shrugged off a bad first half and threw 2 TDs. WR Adam Thielen posted another 100+ yard game and his streak continued. Rookie QB Sam Darnold looked like a rookie in a loss for the Jets (3-4). Darnold threw three interceptions and completed only 17 of 42 passes for only 206 yards.

ANOTHER WEEK, ANOTHER BROWNS OVERTIME GAME

Tampa Bay Bucs 26, Cleveland Browns 23… The Browns (2-4-1) played in their fourth overtime game of the season. They lost this one in true Browns fashion when Chandler Catanzaro drilled a 59-yard FG in overtime to clinch the win. Catanzaro set an NFL record for the longest FG in OT. The Bucs’ (3-3) inept D finally held someone under 26 points!

Washington Redskins 17, Dallas Cowboys 14… Hey, guess what? The Cowboys (3-4) played another dramatic and controversial game. The Skins (4-2) defeated a tough division foe to hold onto first place in the NFC East. In the 4Q, Skins linebacker Ryan Kerrigan strip-sacked Dak Prescott, which was recovered for a touchdown by Preston Smith. The Cowboys (3-4) missed a game-tying FG that the zebras pushed back to the 52-yard line due to a bogus penalty.

Houston Texans 20, Jacksonville Jaguars 7… The Texans (4-3) took over first place in the AFC South. QB DeShaun Watson traveled via bus from Houston to Jacksonville because he’s rumored to have a punctured lung and team doctors did not want him to risk flying. The Jags went from one of the best teams in the AFC to a team in turmoil in a flash. The Jags finally came to their senses and benched Blake Bortles after two fumbles. Will the Jags (3-4) panic and trade for Derek Carr? Or will Tom Coughlin give his former QB Eli Manning one last shot?

DENVER OFF THE SCHNEID

Denver Broncos 45, Arizona Cardinals 10… The Broncos (3-4) needed a slump buster. Badly. And got one. Poor Larry Fitzgerald. It took the #7 all-time receiver seven weeks to score his first touchdown of the season for the Cardinals.

ONLY DEGENS WERE WATCHING

Indy Colts 27, Buffalo Bills 5… Of course, the Bills only scored 5 points, but 40% of their offense came from a safety. The Colts (2-5) won this battle of futility against the lowly Bills (1-6). No one was happier to have T.Y. Hilton back than Andrew Luck.

Atlanta Falcons 23, N.Y. Giants 20… Matty Ice and Eli Manning both struggled in the first half. They waited until the 4Q to put up points (27 total). Eli finished with 399 yards and a TD to Odell Beckham, but the Giants could not take advantage of the second-worst defense in the NFL. Another crushing loss for the G-Men (1-6), who had an extra week to prep for this game and still posted the L. NYC talk radio is already calling for Eli Manning’s head on a platter.